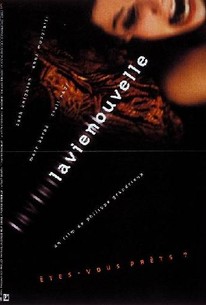 In the scattered narrative of The New Life, men and women are for sale, apparently to be used as prostitutes, at a housing project somewhere in Eastern Europe. Melania (Anna Mouglalis of Merci Pour le Chocolat) is bought by a pimp, Boyan (Zsolt Nagy), who brings her into a room and torments her, painfully cutting off her hair with a pocketknife before forcefully kissing her. Seymour (Zachary Knighton), an American, goes to a strip club and watches some dancers. He is immediately attracted to Melania, and pays to have some private time with her. Once they're alone, he hesitates, uncertain of himself, before lust overcomes him and he pounces on Melania. It's over in a moment. She dresses quickly and leaves, while he lays on the bed, moaning in despair. Melania next services a sadistic man whose instructions she can't seem to follow properly. He humiliates her, beats her, and then sings her a song. Seymour becomes obsessed with Melania. He watches her sing in a nightclub. He pays to spend more time with her, and then tries to buy her outright, against the advice of his troubled friend, Roscoe (Marc Barbé, who starred in director Philippe Grandrieux's debut film, Sombre). Seymour fantasizes about taking Melania away, but Boyan is determined to keep her. He makes her dance for him, spinning like a top. Roscoe winds up being chased through the woods and attacked by dogs. The New Life, scripted by Grandieux and Eric Vuillard, was shown at the 2002 London Film Festival and at Lincoln Center in New York as part of their 2003 Film Comment Selects series. ~ Josh Ralske, Rovi

Because the subject matter of the film is unremittingly bleak, the majority of the pleasure for most viewers will likely be derived from decoding these beguiling visuals and the thrill of not knowing what Grandrieux will come up with next.

There are no featured audience reviews yet. Click the link below to see what others say about La Vie Nouvelle (A New Life)!