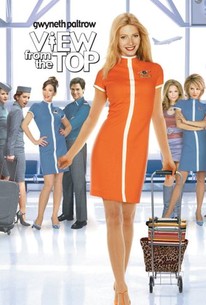 Critics Consensus: Uneven in tone and badly edited, A View From the Top wastes the talents of its cast and condescends to its characters.

Critics Consensus: Uneven in tone and badly edited, A View From the Top wastes the talents of its cast and condescends to its characters.

Critic Consensus: Uneven in tone and badly edited, A View From the Top wastes the talents of its cast and condescends to its characters.

View from the Top Photos

Brazilian filmmaker Bruno Barreto directs this comic look at the world of flight attendants starring Gwyneth Paltrow as Donna, a small town Nevada woman who dreams of seeing the world by becoming a first class international stewardess. Lacking the requisite poise and class, Donna finds a mentor in retired trade veteran Sally (Candice Bergen), a wealthy, best-selling author who assists with advice and her considerable influence. Despite Sally's help, Donna finds the process of fulfilling her career ambitions more difficult than she imagined when she's betrayed by a trusted friend (Christina Applegate) during flight training, a daunting course taught by the bitter John Whitney (Mike Myers), a once-aspiring steward whose eye condition kept him forever out of the friendly skies. Donna also faces a romantic crisis when she falls for a handsome law student (Mark Ruffalo) whose education consigns him to Ohio, far away from the major urban hubs Donna dreams of working. A View from the Top (2002) costars Rob Lowe, Josh Malina, Kelly Preston and Jon Polito.

George Kennedy
as Himself

Critic Reviews for View from the Top

What was Gwyneth Paltrow thinking?

A flat, superficial comedy that never establishes a tone.

Paltrow cannot begin to save this unfunny flight attendant comedy that should have gone direct to video.

The characters have no wit or charm, the plot has no conflict or development, nothing happens for any reason other than script requirements.

It's just sweet and light, but it's got kind of giddy charm to it ...

View for the Top is one of those movies I saw years ago and, every now and then, I sit back and wonder, "Wait a minute - did that really happen?"

[A]n airy bit of fluff, a soap bubble of a movie.

Teeters on the edge of lightweight, bland fare more associated with what's on airline menus. But the cast adds flavor and energy to the otherwise unremarkable itinerary.

Not even cameos by Rob Lowe as a copilot, Chad Everett as Sally's Weston's husband, or George Kennedy as an airline passenger can rev up this plummeting plane wreck.

Audience Reviews for View from the Top

Don't stop till you reach the top. Decently Good movie! The movie is about airline stewardesses and their way to the top. This sounds like a dull subject because it is. This can hardly be stretched out into a long movie without becoming repetitive. But, in a sense, it isn't clichéd - there are no evil characters bent on the heroine's destruction, there aren't any sexually suggestive pilots hitting on the heroine. It's just a story about a woman trying to make it to the top. It will probably inspire and enthrall the younger crowds but leave older audiences unsure. This movie has sweet performances and sweet intentions, and comes off the way it wants to - sweet - but I can't bring myself to fully recommend you pay to see it. "View from the Top" isn't a particularly fine movie. It's watchable fluff, and the techniques the film use are not as clichéd as something like "Legally Blonde." But in the end, I realized I had barely laughed at anything. Perhaps clichés aren't always the things to avoid. Donna Jensen was raised literally and figuratively on the wrong side of the trailer park in Silver Springs, Nevada. She always believed it was her destiny to get out of Silver Springs. After reading Sally Weston's book, Sally who is arguably the most famous now ex-flight attendant in the world, Donna believes the path to leaving Silver Springs is to become a flight attendant despite never having been on an airplane. After an initial bumpy start to this career, Donna shows a natural flair for the job, so much so that she applies to work for world class Royal Airlines, where Sally Weston mentors. After meeting Donna, Sally believes Donna is destined for flight attendant greatness, namely working first class in the New York-Paris flights. Donna believes in herself as a flight attendant, but has to overcome some obstacles, including flight attendant trainer John Witney, who has some hidden anger issues, and her friend Christine Montgomery who also wants to be a great flight attendant.

A bad movie that's not without its good moments, but one that just clunks along from head-scratcher to head-scratcher. Mike Myers's character is quite funny, and Gwyneth Paltrow does ok, but they have nothing to work with.

Not that Im segregating movies according to gender but this is just totally a chick flick. Anyway I like this one cause its got a nice influential message and its a feel good movie but its not exactly a comedy.

View from the Top Quotes