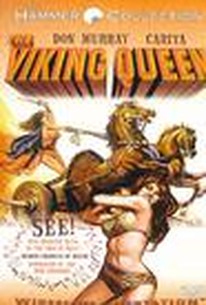 Set in first century England, The Viking Queen is a loose retelling of the legend of Boadicea (also sometimes known as Boudica), the queen of the native Britons, who were known as the Iceni. In the year 60 A.D., the Roman governor general Justinian (Don Murray) attempts to rule over the island from wisdom as well as strength, believing that winning over the hearts of the Iceni people will work better for the Empire than brutalizing them. He has help from his cultured advisor Tiberion (Niall MacGinnis), and finds an ally (and much more) in Salina (Carita), the daughter of the late King Priam ({Wilfred Lawson}), who has been chosen to rule the Iceni. Together, Justinian and Salina attempt to share responsibility for ruling the island nation, and to make the laws and the tax system fairer for the Iceni -- they also discover that they actually love each other and want to marry. Their romance and their attempts at bringing more civilized rule are thwarted by treachery on both sides. Among the Iceni, the Druids, led by the high priest Maelgan (Donald Houston), oppose the Romans because their rites (involving human sacrifice) have been banned, and Maelgan wishes Salina to fulfill the destiny that he has prophesized for her: to take up arms against the invaders. The wealthy Iceni merchants, led by the procurer Osiris (Dennis Shaw), oppose Justinian because of the higher taxes that he has imposed on them. Among the Romans, Justinian's military commander, Octavian (Andrew Keir), doesn't care for diplomacy or persuasion, except at the point of a sword. Conspiracies abound in both camps, which leads to Justinian being called away, and, in his absence, Octavian destroys the treaty between the two peoples. Finally, Salina is forced to take up arms and lead her people in open revolt against the Romans. The two would-be lovers face each other in battle, where, in the achieving victory, Justinian learns precisely how fierce and proud a warrior and a queen Salina is. ~ Bruce Eder, Rovi

Wilfrid Lawson
as Priam of Troy

Critic Reviews for The Viking Queen

Silly Sword-and-Sandal costume pic that takes itself so seriously.

Audience Reviews for The Viking Queen

I am a big fan of the Hammer Studios but they should stick to your guns, if it's vampires, werewolfs, zombies, mummies, I am sold - Hell, I dont even mind seeing an old crazy Bette Davis but a retelling of the Boadicea ? Nope, that did not work out all and it's not even wicked enough to be entertaining as some sort of whacko B-Movie. This is just bland, pointless and uninspired with some sexy druid rituals and half-naked women thrown in to tick that box of celtploitation at least. Anyhow, this is worth passing by.