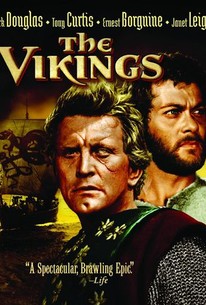 Critics Consensus: Despite moments of excess, The Vikings has enough balance in its larger-than-life action sequences and characters to entertain.

Critics Consensus: Despite moments of excess, The Vikings has enough balance in its larger-than-life action sequences and characters to entertain.

Critic Consensus: Despite moments of excess, The Vikings has enough balance in its larger-than-life action sequences and characters to entertain.

Inspired by the novel The Viking by Edison Marshall, The Vikings was lensed on location in Norway under extremely adverse weather conditions. Adding to the difficulty was the fact that star Kirk Douglas and director Richard Fleischer never quite found a common ground, and for years thereafter would hold each other responsible for the film's falling short of its potential. Still, the finished product is quite a feast for the eyes and ears. Douglas, the son of Viking leader Ernest Borgnine, carries on a film-length feud with slave Tony Curtis, who, though he does not realize it, is actually his illegitimate son. This personal battle comes to a head when Douglas and Curtis both lay claim on captured English princess Janet Leigh. The scene everyone remembers in The Vikings finds Borgnine, at the mercy of wicked monarch Frank Thring, defiantly throwing himself into a pit of ravenous wolves. Launched into distribution with one of the splashiest ad campaigns in United Artists' history, The Vikings proved an enormous success; it inspired the 1959 TV series Tales of the Vikings, which utilized the film's props, costumes and scale-model ships. In 1964, The Vikings served as the inagural presentation of ABC's Sunday Night Movie series.

News & Interviews for The Vikings

View All The Vikings News

Critic Reviews for The Vikings

Proper Hollywood overblown Viking adventure with not a shred of authentic detail but lots of glam and ham.

Though it avoids many of the obvious pitfalls of Viking lore, The Vikings suffers from being both sillier and less outlandish than the real thing.

The Vikings is spectacular, rousing and colorful.

It is the best advertisement for beer-drinking since the breweries put wrestling on TV.

Plenty of pillaging, axe-throwing, hearty quaffing of ale, storming of castles, heroic jumping into wolf pits, and manly talk about the glories of entering Valhalla with sword in hand.

The film, gory and raucous, is a worthy specimen of its kind, and camera-ace Jack Cardiff's color photography deserves an Oscar nomination.

The Vikings is a juicy and lively work that has an incredible dynamism and dazzling visuals. [Full Review in Spanish]

Curtis' 'hero' is an unmitigated swine who cuts a swathe of destruction through the lives of all around him. Highly recommended.

An enjoyable adventure film that benefits from first class work all round, The Vikings is a must for film historians and a pleasure for the rest of us.

The real stars are the production people

Directed with brawn over brain by Richard Fleischer.

Audience Reviews for The Vikings

The "Spartacus" pairing of Kirk Douglas and Tony Curtis together again for some sword and sandal, sackcloth costume wearing, teeth-gritting action all the way ... solid entertainment any way you look at it! Janet Leigh as the sultry woman between them, And once again, Ernest Borgnine anchors the thing whole movie with an understated (but overstated) supporting role as the lusty Viking King Ragnar.

This is a cool movie about Vikings as played by Douglas and Curtis. The movie is really exciting and the story is great, it's pretty accurate, and very dramatic as well. I enjoyed this movie.

Just a great epic that never lost it's sense of fun and imagination. A lot of that goes to Kirk Douglas who is the epitome of the legendary Viking, he's a brutal drunken savage. However, he's also a great character and full of emotion rather than being just a stereotype. What also makes it great is the amazing set design, costumes and score. On top of that, the story is so well done and not typical of just another love & war story. The castle invasion is probably one of the greatest battle scenes, you don't get better action than that.