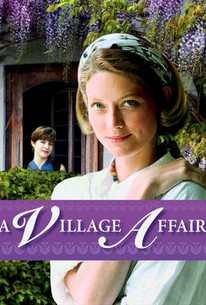 Sophie Ward and Kerry Fox star in this adaptation of Joanna Trollope's best-selling book about the scandalous affair between a young mother and a vivacious heiress. Alice (Ward) lives in a stately home with her young children and her handsome husband. Yet despite maintaining a happy façade, Alice can't help but feeling like she's missing out on life. Into Alice's life wanders Clodagh (Fox), a wealthy and worldly woman who has just returned from abroad. Clodagh represents everything that Alice wishes she was, and her very presence seems to awaken the frustrated housewife from her domestic stupor. But the greater their love for one another grows, the more difficult it is to keep it a secret from the outside world. Will these two women ever be able to find true happiness while living in a devoutly religious community where their love is viewed as a sin against humanity? ~ Jason Buchanan, Rovi

Critic Reviews for A Village Affair

There are no critic reviews yet for A Village Affair. Keep checking Rotten Tomatoes for updates!

There are no featured reviews for A Village Affair at this time.