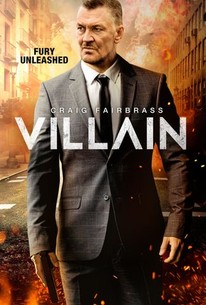 Critics Consensus: Much like its taciturn hero, Villain isn't particularly flashy or creative about getting the job done, but it's still undeniably effective.

Critics Consensus: Much like its taciturn hero, Villain isn't particularly flashy or creative about getting the job done, but it's still undeniably effective.

Critic Consensus: Much like its taciturn hero, Villain isn't particularly flashy or creative about getting the job done, but it's still undeniably effective.

After 10 years, Eddie Franks (Craig Fairbrass) is out of prison and trying to stay on the straight and narrow, but his drug-mule brother Sean (George Russo) has other ideas. Rival gangster brothers Roy and Johnny Garret (Robert Glenister and Tomi May) are demanding Sean repay his debt to them, causing Eddie to get tangled in the crossfire, ending up using his life savings and calling in favors with mobster friends to try and help. Following a dramatic coup at the family pub, events spiral out of control in the ultimate fight for survival. With a powerful performance from Fairbrass, VILLAIN is a gritty British thriller which depicts a dark, criminal underworld.

Tomi May
as Johnny Garret

The Indie Fresh List: British Gangsters, an Unlikely Friendship, and a Feisty Hustler

Nobody in this movie has a complex inner emotional life, so it's not surprising that the movie's ending is ridiculous.

Brisk yet flavorful, gritty even when stylish, its occasional plot-logic leap smoothed over by a tone that deftly balances a resigned good humor with violent threat...

Any movie containing the line "You need to grab that hacksaw and start on his legs" is already halfway to winning me over, and Philip Barantini's "Villain" does not disappoint.

A muted Fairbrass does some good on-camera brooding, but the character and the film never feel like more than a paper-thin pose.

But Villain feels like twenty-first-century London: racially diverse, divided along class and privilege lines, scared of the young, scared of getting old.

Over-familiar gangland lullaby worth a sit-thru, if not worth one's undivided attention.

A motion picture of folk-art integrity and conviction of sensibility, done by a band of outsiders with something to prove - a debutant out to make a mark and a leading-man showing that, sure, he can crack a skull, but he can break a heart too.

Fairbrass plays sad and desperate with as much authority as he does tough and menacing, delivering one of the best turns in his prolific career while doing so.

It has an intensity and energy that's explosive.

The latest story of an ex-con trying to go straight, this British drama takes a more character-driven approach yet doesn't find anything new to say about rehabilitation or recidivism.

There are no featured reviews for Villain at this time.