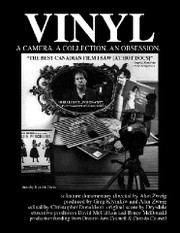 Super Reviewer
Eric B
March 5, 2014
Personal identification was a major factor for me here -- I'm pretty close to the mentality of the lone-wolf record collectors in this documentary but, thankfully, far enough removed that I can tell myself, "Well, I don't go *that* far." And more often than not, I also prefer CDs. So take that, you oldies-minded purists!

Regardless, it's fascinating to hear these collectors (mostly forlorn, homely, underachieving bachelors) detailing their record-buying habits more with shame than joy, as if it's a destructive addiction they're struggling to master. However, director Alan Zweig's own self-filmed musings grow tiresome -- he has a grating voice and manner (imagine a more Jewish version of Kevin from TV's "The Office") and just wasn't someone whose company I wished to share for almost two hours. (The 110 minutes pass slowly, considering the footage is virtually nothing but raw interviews in dingy living spaces.)

I would have enjoyed more "fun" exposure to the nutty rarities that these people own, but "Vinyl" really isn't about music. It's about the psychology of collecting. Wherein these weary misfits buy piles of records that they may not enjoy or even play, seemingly because they're just afraid of regretting a missed purchase later. Or because they don't want the records to fall into enemy hands. Or simply because a kitschy sleeve gives them a laugh. (Heck, we've all bought records for this reason, haven't we? Um...haven't we?)

Writer/artist Harvey Pekar, actor Don McKellar and director Guy Maddin turn up without any special introduction -- in fact, I can't even recall where Maddin appeared.

Dan B
October 28, 2013
The director/narrator is far too self indulgent and makes the film more about himself than the interviewees, often directly projecting his insecurities on to them. Still there are valid points there and some of the odd people featured make it all interesting enough.

Jamie F
August 12, 2012
In depth look into the lives of some hoarding record collectors.

Simon C
½ June 26, 2009
Low budget documentary about record collectors: the music lovers, the vinyl obsessives, the Elvis fans who own his every song 10 times over; the deluded redneck who thinks he's close to owning every record ever made, and that there are only four bands whose names begin with Q....

So far, so typical I guess. What makes it interesting is that the film-maker, himself a collector, is really more interested in exploring why he, and other collectors, don't have girlfriends. Those who *do* have girlfriends are quizzed as to how that is possible, while he psychoanlyses those who don't, trying to find out what is wrong with them, and if record collecting is just a substitute for not being in a relationship.

Jeremiah L
July 28, 2008
Amusing look at record collectors. I'm glad I don't have enough money to let my collection get this out of hand. The director's lonely musings is entertaining at first but gets annoying when it goes on for way too long.

Damien D
½ March 17, 2008
Not actually a very good movie, but a fairly compelling argument against collecting records or anything at all, and interesting if you're say a music freak.

Geir F
½ January 20, 2008
Interesting subject matter, but the documentary has a bit too much of a freak show angle to it (unintentionally so), and is far too long.

Lauren M
January 11, 2008
Collectors sort of freak me out. Which makes my job pretty uncomfortable.

Tony B
November 12, 2007
For the audiophiles and anyone that loves a very good and very personal documentary. It's about the life of a obsessive record collector and others like him, but it is so much more than just that, you just have to see it. Amazing work for a first time DIY amateur film-maker.

Private U
November 8, 2007
One of the deepest, saddest movies I have ever seen.

Kitty O
½ August 4, 2007
Walks a thin line between self-examination and self-absorption, but I think it's a great film. Recommended for anyone who's ever known an obsessive record collector, or for fans of the American Splendor and Crumb comics and films.
Page 1 of 1