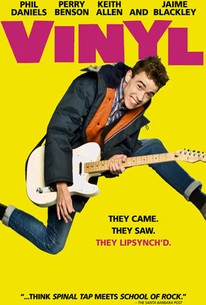 A group of aging rockers pull a fast one on the youth-obsessed music industry by hiring a group of photogenic teenagers as their stand ins, and releasing a scorching punk-pop single that rockets up the charts in this comedy inspired by actual events. Back in his day, Johnny Jones (Phil Daniels) and his band The Weapons of Happiness were all the rage. A few decades later, they're just a bunch of old, out-of-work musicians reminiscing about the glory days. Then one day, during a particularly inspired jam session, The Weapons of Happiness crank out a tune that's a surefire hit. Trouble is, every record executive and DJ they approach rejects them as too old and tired to turn out a hit. But that only fuels Johnny's determination to prove his detractors wrong, and when the band recruits a group of fresh young faces as their media proxies, The Weapons of Happiness find themselves in the midst of a unexpected comeback. ~ Jason Buchanan, Rovi

[Vinyl] begins to lose momentum once the focus shifts away from the hoax and onto a series of listless subplots pulling the film away from satire and into the realm of bloated family drama.

A curiosity piece which, on its own, will not be enough to spawn a punk revival.

Vinyl is a harmless bit of good fun, and although it's easy to pick holes, it tells a good story and remains under 90 minutes long.

Peters' original prank made a valid point about the music industry's obsession with new artists, but Sugarman winds this story to a formulaic, feel good conclusion that feels more conforming than the punk spirit that inspired it.

There are no featured reviews for Vinyl at this time.