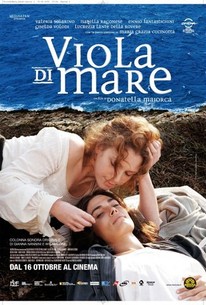 A woman who dares to live as she pleases is officially declared a man in this historical drama inspired by a true story. Angela (Valeria Solarino) is a strong, passionate, and willful woman whose father (Ennio Fantastichini) operates a mining business for the Spanish royal family. Her father wanted a boy and makes no secret of his disgust with Angela, despite (or perhaps because of) her willingness to flaunt the conventions of what is acceptable for a woman in 19th century Spain. Angela is powerfully attracted to her childhood friend Sara (Isabella Ragonese), and though Sara is pledged to marry Tommaso (Marco Foschi), Angela sets out to win her heart. Her father, however, has arranged a marriage between Angela and the son of a business associate; Angela bitterly refuses to wed the young man, declaring she would prefer death to the false relationship. Her mother, Lucia (Giselda Volodi), arranges for a radical solution to this dilemma; using some privileged information as leverage, she persuades the village priest to declare that Angela is in fact Angelo and has been a male all along. This action prevents Angela from marrying the boy and allows her and Sara to be together, but now her father insists she take her place in a business she doesn't care about, and the community isn't sure how to react to the new "man" in the village. Viola di Mare (aka Purple Sea) was an official selection at the 2010 San Francisco International LGBT Film Festival.

There are no critic reviews yet for Viola di mare (The Sea Purple). Keep checking Rotten Tomatoes for updates!

There are no featured reviews for Viola di mare (The Sea Purple) at this time.