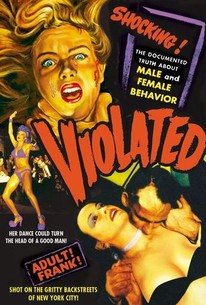 Disguised as a cautionary suspense thriller, Violated is essentially an excuse to display some strippers taking their clothes off. Lili Dawn plays an exotic dancer named Lili DeMar, who is used as bait by the police to bring a sex offender out into the open. The acting is bad and the direction worse, but there's no denying that the film is extremely well-photographed by Pat Rich. Those uninterested in the undulations of Lili Dawn will enjoy the creative musical score by Tony Mottola, who in 1953 had achieved a measure of fame for his work on TV's Suspense. Considered hot stuff when first released, Violated is mild to middling when seen today.

Mike Keene
as Gardner
View All

There are no featured reviews for Violated at this time.