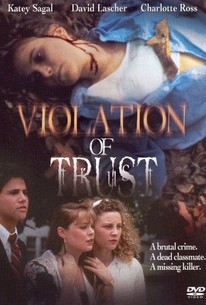 She Says She's Innocent stars off as a standard "legal issue of the week" TV movie. Katey Sagal refuses to believe that her daughter Charlotte Ross is guilty as charged of murder. Usually this is a cue for a feature-length fight against the legal system: Not so here. Instead, Sagal spends the last 20 minutes of the film playing amateur sleuth to track down the real killer--and in so doing leaves herself open to a near-fatal confrontation. If the name of the director She Says She's Innocent seems familiar, it should; Charles Correll was the grandson of the radio actor of the same name--the man who, with Freeman Gosden, created Amos N Andy .

Critic Reviews for Violation Of Trust

There are no critic reviews yet for Violation Of Trust. Keep checking Rotten Tomatoes for updates!

There are no featured reviews for Violation Of Trust at this time.