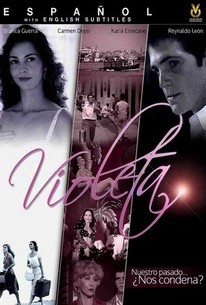 Alberto Cortes wrote and directed this Mexican-Cuban drama, an adaptation the Nicolas Dorr play about aging Violeta (Blanca Guerra) who tells her life-story to Cuban journalist Felix (David Ramy) during 24 hours in her small apartment above a Chinese restaurant. After her first lover was killed by soldiers, she became a NYC stripper and hooker, had two children (but one died), and entered into an affair with a famous film star. When he betrayed her, she profited with a sale of her story to a tabloid. The actor and his associates then abducted and raped her, but she fought back. When she slashed the actor's face, it ended his career and led to her return to Cuba. Shown at the 1998 Guadalajara Film Festival. ~ Bhob Stewart, Rovi

There are no critic reviews yet for Violeta. Keep checking Rotten Tomatoes for updates!

There are no featured reviews for Violeta at this time.