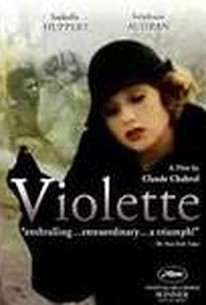 Claude Chabrol's Violette was based on the true story of 19-year-old Violette Noziere, who in the 1930s was tried and convicted for the poisoning of her father and the attempted murder of her mother. As played by Isabelle Huppert (who won several awards for her performance), Violette is a thrill-seeking girl who falls for a no-good slug from the slums of Paris. Anxious to give money to her lover, Violette hatches the patricide scheme in order to inherit her father's fortune. But Violette's mother, played as an deglamorized drudge by the otherwise stunning Stephane Audran, is not so easily disposed of; it is her testimony that condemns Violette, first to the guillotine, then to a commuted life sentence. In emulation of his idol Alfred Hitchcock, director Chabrol manages to evoke a measure of sympathy and audience identification for his thoroughly dislikable leading character. ~ Hal Erickson, Rovi

Dominique Zardi
as Boy in Cafe

Maurice Vaudaux
as Willy
View All

Violette sits there on the screen, a stylish lump.

Violette doesn't so much rejuvenate the "sex = death" equation that had been in place since Louise Brooks opened Pandora's Box as it does struggle to remember why women want sex in the first place.

The film is not as involving as one might wish, but it's worth seeing for its intelligent, icy dissection of a chilling, true crime story.

A solid and thrilling film -- if a bit slow and ambiguous at times. [Full Review in Spanish]

Chabrol's attempt to arouse sympathy for his heartless protagonist seemed a reach.

Huppert's baby-fat monster is a neat landmine of familial tensions, and Chabrol knows just how far to push it

Though the film tends to follow the trajectory of surface events and not delve deeper into either psychological motivations or historical influences, Chabrol's moody flourishes and storytelling tapestry are never less than mesmerizing.

Chabrol film about a teenage prostitute who kills her parents, based on real-life story. Mostly interesting for its atmosphere and for Huppert's acting.

The way [Huppert] holds her cigarette and wears her hat aslant would have given Bette Davis a run for her money.

[font=Century Gothic]"Violette" is a passable movie wherein director Claude Chabrol adds a few curveballs to his usual straightforward style in telling the story of Violette(Isabelle Huppert), a teenager in the 1930's, who hangs out with her friend Maddy(Lisa Langlois). Bored with the routines of the working class existence in her parents'(Stephane Audran & Jean Carmet) apartment, she turns to get what she wants by lying, stealing and prostituting herself. In return, she contracts syphilis from a medical student(Fabrice Luchini). However, her ineffectual parents still think of her as the little girl she once was, not that far in the past. But people change, children very rapidly which includes Violette who is now standing on the cusp of adulthood. This is a state of transition enunciated by having an adult actress in the title role which also ensures that nobody gets arrested.[/font]