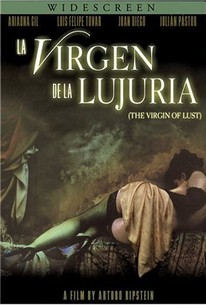 Legendary Mexican director Arturo Ripstein explores the mundane and sexual obsession in 1940s Mexico in his 2002 film The Virgin of Lust. Introverted Ignacio "Nacho" Jurado (Luis Felipe Tovar) spends his days waiting tables at the Cafe Ofelia and his nights amongst his voluminous porno collection. His world is turned upside-down when a prostitute named Lola (Ariadne Gil) begins hanging out at the cafe. Nacho is immediately smitten with the whore, but Lola's mind is focused on a very brutish wrestler who'll have nothing to do with her. Lola, a natural sadist, recognizes Nacho's penchant for being dominated and she begins to fully exploit this chance to unleash her cruelty on a willing recipient. As the relationship settles into its regular perverseness, Nacho is presented with what he sees as an opportunity to capture Lola's heart completely -- to become a macho revolutionary hero by assassinating Francisco Franco. The Virgin of Lust was chosen for inclusion into the Upstream program at the 2002 Montreal World Film Festival, winning a Special Mention prize from that program's jury. ~ Ryan Shriver, Rovi

Carlos Chávez
as Ezequiel
View All

[At times] almost stage bound, but perhaps that's because it's better than most homage at being faithful to the material that inspired it.

A grandly-scaled allegory that is at once fascinating, captivating, and utterly audacious

The profane example "de passion" at the eve of the new century.A showcasing performance for Gil,Ripstein's possibly final so far artistic masochism,damn,there are references to wrestling and Franco altogether!Crazy innuendos but the result is quite extraordinary.