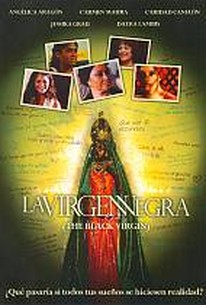 The oppressive air over a small fishing village begins to lift after a neglected wife convinces a local witch to secretly replace the patron of their church with the Black Witch. Though the founder of the village approves the change, it's performed without the knowledge of the general population. Once the ritual has been completed, tensions around the village begin to dissipate and love fills the air. But just as the woman who invoked change prepares to spread the secret of true happiness, a group of young children accidentally destroy the image of the Black Virgin, and the town experiences a disturbing shift in mood. ~ Jason Buchanan, Rovi

For a film that has a strong theme of romance and seems intent on exploring grey areas between superstition and religion, reality and fantasy, there are an awful lot of things being presented in black and white.

There are no featured reviews for La Virgen Negra at this time.