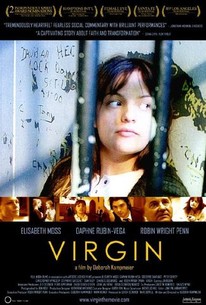 Elisabeth Moss turns in a compelling performance as a rebellious and troubled teen who, in a drunken state, becomes pregnant, even though she claims that she's never had sex. Robin Wright Penn gives stellar support as the girl's mother (and serves as executive producer). The film, which was shot on a budget of less than $75,000, marks the directorial debut of Deborah Kampmeier, who also wrote the script. Stephanie Gatchet, Charles Socorides, Socorro Santiago, Peter Gerety, Sam Riley.

Patrizia Hernandez
as Girl in Diner

Tom Bruno
as Officer One

Katharine Basilevsky
as Classmate One

Doug LaTessa
as Protestor
View All

The more you consider the theological undertones of Virgin, the more radical it becomes.

As a religious-themed movie, Virgin is as unconventional as they come.

So much of Virgin is bunk masquerading as sexual politics.

An unfortunately muddled portrait of a teenage girl going through a moral and spiritual crisis.

Evinces too much of the Lars Von Trier influence (especially Breaking the Waves) while falling victim to some of its central character's overt strangeness.

At times I wasn't sure that the movie knew exactly what it wanted to say. And yet it remains quite a powerful experience.

Moss' performance is solid, but undone by the palsied hand-held camerawork and the script's general lack of focus.

Falls short of being satisfying, hurts a little to experience, and the next morning you're thinking it wasn't worth the trouble - sound familiar?

A pretentious, unpalatable stew that serves up thematic elements touching on religion, feminism, psychosis, mysticism and guilt without stirring up any believable characters, engaging story, or emotional moments that might engage audiences.

Kampmeier reveals her inexperience as a feature filmmaker, and her effort struggles with the weight of its own subject matter and final ambiguities.