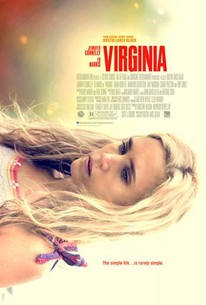 Critics Consensus: Brave, autobiographical, but also completely off the mark, Virginia is a frantic drama that fails to pull the viewer in.

Critics Consensus: Brave, autobiographical, but also completely off the mark, Virginia is a frantic drama that fails to pull the viewer in.

Critic Consensus: Brave, autobiographical, but also completely off the mark, Virginia is a frantic drama that fails to pull the viewer in.

A single mother struggles to raise her son Emmett while dreaming of escaping her small Southern boardwalk town. Her long time affair with the very married, Mormon Sheriff Richard Tipton is thrown into question when he decides to run for public office. Things are further complicated when Emmett begins a romantic relationship with Tipton's daughter. Virginia and the town-populated by Amy Madigan, Toby Jones, Yeardley Smith-are full of secrets and everyone knows Virginia can only keep things together for so long. Virginia is a funny, touching drama that looks at the American Dream and what it takes to keep it together. -- (C) Official Site

It's a hard picture to pin down--it has the raw materials for a big, dumb farce, but it stakes out a claim in altogether more interesting territory.

A strong cast can't save "Virginia," Dustin Lance Black's film about a schizophrenic mom in a small Virginia beach town.

Black seems to be aiming for some sort of loopy fantasia, a tragic fable about struggling with difference in the small-town South, but he's got more half-finished ideas than he can handle.

It's all rather wacky and hard to follow or fathom, although maybe that's attributable to Virginia's schizophrenia veering off on its delusional phase.

A bravely demented semi-autobiographical drama that never lives up to the potential of its high-powered cast.

Set among the hangdog hicks and arcade attractions of a fictional Southern beach town, the loosely autobiographical movie aims for roller-coaster passion but only flatlines.

Dustin Lance Black shows us that it is truly is the simple things in life that are often the most wonderful...just like Virginia.

It's not funny, it's not charming and it's only clear it's set in modern day when a character mentions the internet.

Sensitive about characters exploring this culture and the conversations they must have trying to figure out relationships. It's not ridiculing or condescending at all.

The film concerns a woman with psychological problems, her married lover and her 16-year-old son, but the tale wobbles between humour and drama in a disconcerting fashion.

"Virginia" starts with the title character(Jennifer Connelly) being carried over the threshold by Sheriff Tipton(Ed Harris), into a waiting a police car. As she so kindly puts it, everything began to go wrong as it always does with a reality show, this one raising the profile of Tipton in his race for State Senate. At the same time, he continues to visit her. So, it might not surprise some that her son Emmett(Harrison Gilbertson) is not exactly sure who his father is. Once he eliminates Tipton from consideration, he feels free to pursue Tipton's daughter Jessie(Emma Roberts), even though he is still not supposed to. All Jessie wants from Emmett is for him to find religion. One might not be surprised to find Dustin Lance Black's directorial debut "Virginia" to miss the mark, considering he has never done this before. The surprising thing is a lot of the fault is due to his screenplay, considering all the acclaim he has in this area. To be brief unlike the movie's story, it goes off in every direction imaginable, including a lead character who is both mentally and physically ill. However, Black must be doing something right to at least get a pulse out of Connelly but otherwise it is not the cast's fault if they don't know whether it is supposed to be a comedy or a tragedy and act accordingly .(Although the first time we see the gorilla mask it is very funny.) The only thing for certain is the movie's main target being religious hypocrisy. Been there. Done that.