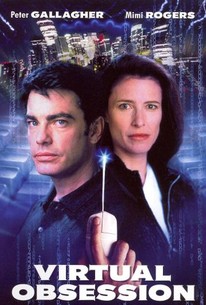 "It makes Fatal Attraction seem like a walk in the park." Thus did ABC herald the three-hour TV movie Virtual Obsession when it first aired on February 26, 1998. Set in Salt Lake City sometime in the future, the story, based on a novel by Peter James, concerns a scientist named Joe Messenger (Peter Gallagher), who has created a super-computer in charge of all the city's power. In the course of his research, Joe has also developed a "post-biological" man in the form of Albert (Tom Nibley), the holographic A.I. manifestation of his computer. Enter Juliet Spring (Bridgette Wilson), a beautiful computer tech who becomes Joe's assistant. Incurably ill, Juliet hopes to keep herself alive by downloading her brain and personality into Joe's computer system. To expedite this, Juliet seductively steals Joe away from his long-suffering wife, Karen (Mimi Rogers). Ultimately, Joe breaks off with Juliet and returns to Karen, thereby incurring the terrible wrath of the now-computerized Juliet -- who is not only deadly, but virtually unstoppable. Almost as confusing to watch as it is to describe, Virtual Obsession has been rerun on cable TV under the title Host.

There are no critic reviews yet for Virtual Obsession. Keep checking Rotten Tomatoes for updates!

There are no featured reviews for Virtual Obsession at this time.