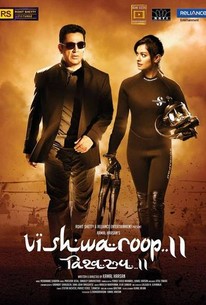 The massive attack planned on New York City by Al-Qaeda Terrorist Omar Qureshi was disrupted by an RAW Agent Wisam Ahmad Kashmiri. The Jihadis Omar And Saleem escape from New York City. Wisam is given the responsibility to eliminate Omar and his Jihadis. Omar and Saleem hurry to execute their international plot to defame three democracies in one day. Wisam plods through traps, conspiracies, murder, mayhem, gut, gore and finally to victory. He thwarts an ingenious plot by Omar to wreak havoc on the independence day of India. Wisam lives to celebrate his independence. Omar and Saleem do not. Wisam mourns his brothers but Nation comes first to a soldier. Vishwaroop 2 offers twice as much action, speed, intrigue and romance as Vishwaroop. It is both a prequel and a sequel to part 1.

The problem with globe-trotting espionage dramas is rooted into its form. Spy thrillers have very little to draw upon, which is why we see so many of the modern versions parodying their own themes rather than building upon real experiences.

The second part lacks the 'WOW' moments and intrigue factor of the first...Had the story been released as a single film with a runtime of around three hours, the impact would've been solid.

The pacing of these scenes is sluggish, and I don't know whether it's the editing or the result of cobbling together leftover footage...

Vishwaroop 2 is a classic example of overkill. This multi-lingual film has been shot in both Hindi and Tamil. And despite having some genuinely good moments, the film tries to put forth a little too much, a little too quickly.

Rachit Gupta
The Times of India

Only Rahul Bose's hoarse-voiced Omar provides the campiness that could have salvaged the movie from its dire sense of self-importance.

Vishwaroopam 2 cannot stand up in front of its fantastic first iteration. Even in terms of narrative and character development, there isn't much left to do in this universe. There are no secrets to be revealed and no intrigue left to be unraveled.

Kamal Hassan does everything right in the film as an actor but we're still left with an unsatisfied appetite as we walk out of the theatre.

There are no featured audience reviews yet. Click the link below to see what others say about Vishwaroopam 2!