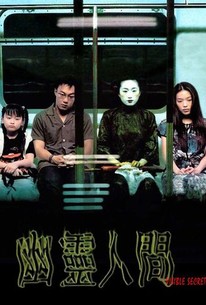 A young girl witnesses a horrific street accident. A man (Anthony Wong in a pivotal cameo) is hit by a trolley and decapitated. Fifteen years later, June (Shu Qi) is all grown up, and doesn't even remember the accident. One night at a club, Peter (Eason Chan), an unhappy young man, sees June dancing, wearing an eye patch, and approaches her. She quickly uses him to get away from another man, and drags him to a karaoke bar. Just as abruptly, they leave the karaoke bar, and she has him take her to his place. The next morning, he awakens to find his apartment splattered with red paint, and fifty dollars missing from his wallet. He and his roommate, Simon (Sam Lee), then discover Peter's father (James Wong) lying in the bathtub, jabbering about how he doesn't have Alzheimer's, but he's possessed. Eventually, Peter runs into the elusive June again, and they seem to be developing a relationship. But despite his romance with this mysterious woman, things continue to go badly for Peter. He loses his job as a hairdresser, and his father commits suicide. Soon, he discovers June's secret. Ever since she was a little girl, she's seen ghosts. She wears dark glasses or an eye patch sometimes, so she won't have to see them. Soon, it becomes clear that one ghost in particular is haunting June--the ghost of a man demanding his head back. As Peter gets closer to June, he begins to unravel the mystery, and discovers a connection to his own family's past. Visible Secret was written by Abe Kwong and directed by Ann Hui (Ordinary Heroes). Kwong would later direct the sequel.

Jo Kuk
as Ghost on the Subway

Tat Lap Ng
as Youngster in Salon B

Over two decades on from The Spooky Bunch, Ann Hui returns to ghosts with this likable horror comedy...

It's a film that's drunkenly slipped between two stools, and winds up not really pleasing anyone.

There are no featured audience reviews yet. Click the link below to see what others say about Visible Secret!