Vision: From the Life of Hildegard von Bingen2010

Vision: From the Life of Hildegard von Bingen (2010) 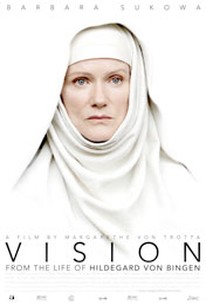 Vision: From the Life of Hildegard von Bingen Photos

Hildegard von Bingen was truly a woman ahead of her time. A visionary in every sense of the word, this famed 12th-century Benedictine nun was a Christian mystic, composer, philosopher, playwright, poet, naturalist, scientist, physician, herbalist and ecological activist. In Vision, New German Cinema auteur Margarethe von Trotta (Marianne and Juliane, Rosa Luxemburg, Rosenstrasse) reunites with recurrent star Barbara Sukowa (Zentropa, Berlin Alexanderplatz) to bring the story of this extraordinary woman to life. In a staggering performance, Sukowa portrays von Bingen's fierce determination to expand the responsibilities of women within the order, even as she fends off outrage from some in the Church over the visions she claims to receive from God. Lushly shot in the original medieval cloisters of the fairytale-like German countryside, Vision is a profoundly inspirational portrait of a woman who has emerged from the shadows of history as a forward-thinking and iconoclastic pioneer of faith, change and enlightenment. -- (C) Zeitgeist

Critic Reviews for Vision: From the Life of Hildegard von Bingen

It is a memorable, beautiful film.

Perhaps unsurprisingly, Vision is didactic and a bit stilted-although to be fair, so are most mainstream biopics rehashing historical events more familiar than this one, which presents its subject as a rousing protofeminist.

There was obviously much to this woman, yet somehow Visions feels curiously empty feeling.

Vision is shot through with issues of power - personal, political, spiritual. Which makes it a terrifically resonant work.

Von Trotta and Sukowa create a very nuanced study of Hildegard, one that imbues the figure with human foibles in a number sufficient to keep at bay any hagiographic impulses.

Barbara Sukowa brings her veteran presence to the role, and nicely fuses its dual nature, holy instrument and holy terror, the passive vessel of a higher power and the active force of the good mother.

Von Trotta's film is competently made, with impressive lighting and design.

As a religious drama, It captivates me when Von Trotta captures an austere, absorbing and very realistic portrait of the desire for female independence. [Full review in Spanish]

A lovely and lyrical film, and thanks to some striking production design and cinematography, it is a period piece that doesn't feel like a period piece.

Sukowa gives Hildegard intriguing complexity and an almost irresistible charisma ... but the great [film] about this woman who embraced faith, art, and science is yet to arrive.

Vision, a somber but beautifully rendered story of the life of 12th-century mystic Hildegard von Bingen, isn't a religious movie so much as a movie about people who take religion seriously.

(A) portrayal of an immortal spirit thriving in a unique vision.

Audience Reviews for Vision: From the Life of Hildegard von Bingen

Biopic on the life of the fascinating 12th century Bendectine nun who saw visions of God and was also a composer, philosopher, polymath, and a strong-willed woman who often butted heads with the Church's male hierarchy. Amazing in it's ability to draw you into its now alien world and get you involved with clerical politics and the slow, quiet rhythms of cloistered life.

"Vision" starts on December 31, 999 with a group of people fearing the end of the world with the Y1K virus, huddled together praying, expecting not to wake up in the morning.(I have heard of people who had hangovers so massive they almost wish they hadn't woken up but that's something else entirely.) They get a pleasant surprise when they do. Into this world of ignorance walks Hildegard von Bingen(Barbara Sukowa) who at the age of eight is given over to the care of a cloister. 30 years later and she is about to be appointed magistra but claims ill health and anyway her fellow nuns should vote for her which they do almost unanimously. Along with her spiritual duties, she becomes interested in medicine and studies how music can also be used to heal the body. And then the visions kick in which she confesses to Brother Volmar(Heino Ferch), resulting with her being threatened with the charge of heresy. Written and directed by Margarethe von Trotta, "Vision" is an engaging look at an amazing woman who was way ahead of her time, depicted not as a saint, but as a flawed human being. With the exception of the Arabic world, the Church had most of the accumulated learning which Hildegard used her skills to negotiate access to for her and her nuns. With this learning, she started the slow walk out of the dark ages into a new world of knowledge. And part of that comes with having respect for and knowledge of the body.(Unless you're getting off on it, I have never understood self-flagellation.)

Vision: From the Life of Hildegard von Bingen Quotes