Visions of 8 - The Olympics of Motion Picture Achievement (1973) 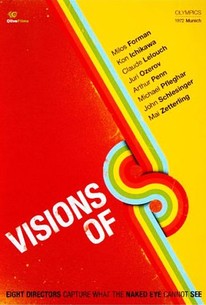 This documentary of the 1972 Summer Olympics, held in Munich, is remarkable for bringing eight of the world's most notable film directors to work on it. They are: Milos Forman, Yuri Ozerov, Mai Zetterling, Arthur Penn, Michael Pfleghar, Kon Ichikawa, Claude Lelouch and John Schlesinger. Each director concentrated on events that were of interest to him and filmed in his own style. For instance, Foreman focused on the comic aspect of the games; Lelouch kept his sights on the losers rather than the winners; and Mai Zetterling examined obsession in the form of weightlifting. The movie does not attempt to comprehensively document the '72 Olympics and does not aim for a unified vision. Instead, it showcases the talents of these directors under the inspiration of this most dramatic of gatherings. ~ Clarke Fountain, Rovi

As for so much of the rest, it seems to forget that it is the privilege of the modest art of film to find the meaning of things just in the way they are seen to be.

The 1972 Munich Olympics as seen by eight directors; eight sequences devoted entirely to sport, with only passing reference to the intrusion of politics. About half of them work.

The problem is that many of the sketches sometimes forget the idea of sport and competition itself, to indulge in ideas.

What nobody could have anticipated, perhaps, is how similar many of those visions would be.

What I liked about all of these films is how little any of them rely on talk; there are interviews or a scrap or two of narration here and there, but on the whole this is visual storytelling.

Eight short films from a group of international filmmakers collectively creating an insightful collage of the 1972 Olympics. (Criterion blu-ray).

A fascinating exercise in artistry.

A fascinating, though extremely ungainly, film to watch today.

Visions of Eight is an excellent record of the 1972 Munich Olympics, a collage imaginatively recording the event from varied perspectives, each with a different focus.

There are no featured reviews for Visions of 8 - The Olympics of Motion Picture Achievement at this time.

Visions of 8 - The Olympics of Motion Picture Achievement Quotes