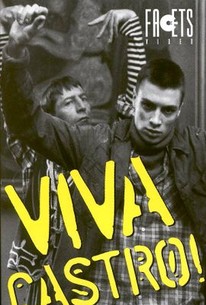 This eccentric Russian black comedy, set in the mid 1960's, are based upon the real-life experiences of director Boris Frumin. The experiences are presented as brief anecdotes. Kolya has a crush on his sexy, flirtatious high school singing teacher. At home Kolya has much to worry about. His father recently left after stealing coins from the museum. To pay for his crime, his mother is sent to a labor camp. A year passes and the father returns. He has terminal cancer and has brought with him a pretty nurse who quickly becomes involved with his son. Kolya is a part of an upcoming "Viva Cuba" concert. He does this to help bring his mother, still in prison, and father together. He becomes distracted when he sees that the concert director is non-other than his former singing teacher.

There are no critic reviews yet for Viva Castro!. Keep checking Rotten Tomatoes for updates!

There are no featured reviews for Viva Castro! at this time.