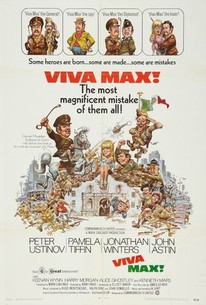 This comedy was banned in Mexico and plagued by vandalism and threats of violence during film production in San Antonio, Texas. General De Santos (Peter Ustinov) organizes a ragtag group of Mexican nationals for the purpose of retaking the Alamo. Using the Washington's Birthday Parade in Laredo as a guise to enter the United States, the group continues towards San Antonio ignored and unchallenged. With the help of Sergeant Valdez (John Astin), the unlikely invaders manage to raise the Mexican flag over the old mission for 24 hours. General Billy Joe Hallson (Jonathan Winters) is a colorful redneck called on to lead the National Guard to the site of the occupied landmark. Keenan Wynn, Alice Ghostley, Pamela Tiffin and Harry Morgan also star in this film farce. During filming, one irate Texan was arrested after waving a rifle in protest over the raising of the Mexican flag over the Alamo, long a symbol of Texas' pride and history. Electric cables were cut during the filming of this production, as some Texans could not even tolerate the fictional premise of the plot.

King Cotton the Horse
as Itself

There are no critic reviews yet for Viva Max!. Keep checking Rotten Tomatoes for updates!

There are no featured reviews for Viva Max! at this time.