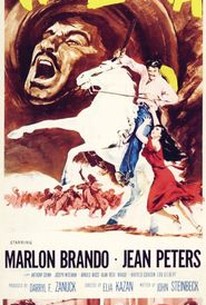 Produced by Darryl F. Zanuck and directed by Elia Kazan, this film follows the life of Mexican revolutionary leader Emiliano Zapata (Marlon Brando) from his peasant upbringing, through his rise to power in the early 1900s, to his death. The film presents an interesting but fictionalized picture of Zapata. Zapata, the child of tenant-farmers, was joined by Pancho Villa in his rebellion against tyrannical President Porfirio Diaz. The film romanticizes Zapata and in doing so unfortunately distorts the true nature of the wars he waged. Zapata fought, not to conquer Mexico but to free the land for the peasants of Morelos and other southern provinces. The Oscar-nominated screenplay by John Steinbeck ignores some historical details in order to focus on the corruptive influence of power. Marlon Brando won an Academy Award nomination for his work, as did Anthony Quinn, who took home the Best Supporting Actor Oscar for his headstrong, hard-fighting, hard-drinking, intensely romantic character who does not hesitate to die for love. The film also features a beautiful score by Alex North, who also received an Academy Award nomination.

Julia Montoya
as Wife
View All

Elia Kazan's direction strives for a personal intimacy but neither he nor the John Steinbeck scripting achieves in enough measure.

The direction and John Steinbeck's script seem stranded in a no man's land between straightforward adventure and a pessimistic allegory about the corrupting nature of power.

Throbs with a rare vitality, and a masterful picture of a nation in revolutionary torment has been got by Director Elia Kazan.

When a film about the Mexican revolution focuses on Zapata's illiteracy instead of his actions to confront a dictatorship goes to show how Hollywood wants to depict Mexicans. Brando as Zapata, no thank you. Quinn makes this film slightly tolerable.

"Viva Zapata!" is one of those films that, while it continues to have impressive aspects, just doesn't hold up as well as it did when it was first made. You find yourself wishing it were in widescreen, and that they had hired at least ONE Latino actor.

Kazan's biopic of the Mexican revolutionary offers good parts to Marlon Brando in the lead and Anthony Quinn as his brother, but it gets too conventional in the second half.

Elia Kazan places an interesting and honest spotlight upon politics, which proves that left wing liberators are just as dangerous as the right wing fascists they have overpowered, and vice versa.

For all its shortcomings, Zapata remains a vital work that has a curious resonance today in light of Kazan's subsequent decision to "name names" for HUAC.

Elia Kazan's only stab at an action picture

Speaking of Pancho Villa, here we have another take on the Mexican revolution that centres on Villa's compatriot Emilano Zapata. Brando is a bit better than Wallace Beery at going above stereotypes but main points in the Revolution are still missed. Perhaps we need a revolutionary epic by one of the promising Latin American directors.

Sluggish, miscast drama surprisingly pedestrian considering the talent involved. Quinn should have played Brando's role and good actress through Jean Peters was she doesn't belong in a part that Katy Jurado would have filled perfectly. Maybe she was busy making High Noon.

Director Elia Kazan and actor Marlon Brando were the ideal combination, and this film is just another piece of evidence. Working from a rich screenplay by John Steinbeck that perfectly captures the scope and tragic character arc of Zapata, Elia Kazan gives the picture his own gritty flavor and simplistic visual appeal. Marlon Brando dominates in the lead role, playing a complex and demanding character full of anguished undercurrents. Fast, exciting and brilliantly executed, this is a masterpiece and a definite favorite of mine.