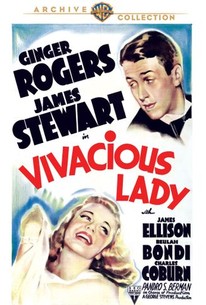 James Stewart and Ginger Rogers were "an item" when Vivacious Lady was filmed, and their obvious real-life affection for one another pours over onto the screen. Stewart plays Peter Morgan, a young botany professor who while on a visit to New York impulsively marries free-spirited nightclub singer Francey (Rogers). A few obstacles lie in the path of connubial bliss, however, including Peter's bitchy ex-fiancee Helen (Frances Mercer) and his stern college-dean father Peter Morgan Sr. (Charles Coburn). Hoping to break the news of his marriage gently to Helen and his father, Pete contrives to keep the union a secret, with the expected embarrassing results. Before the final fade-out, both Morgan Senior and Morgan Junior are on the outs with their respective wives, and it takes an uproariously tearful reunion on a passenger train to straighten things out. In his first outing as a producer, director George Stevens shows off his two-reel-comedy training with a number of hilarious comedy setpieces (the best is a slapsticky cat-fight between the two rivals for Pete's affections), though things tend to slow down towards the end. Stevens also finds room for several of his favorite character actors, including Grady Sutton, Franklin Pangborn and Willie Best, to do their time-honored specialties. Best of all is Beulah Bondi as James Stewart's mother (one of several such assignments), delivering a most unusual and touchingly funny performance. In short, Vivacious Lady was a guaranteed box-office smash even before the cameras began to turn.

Alec Craig
as Joseph the Chauffeur

Spencer Charters
as Husband on Train

Maude Eburne
as Wife on Train

Jane Eberling
as Girl on Bus

Ray Mayer
as Man on Train

George Chandler
as Man on Train

Lloyd Ingraham
as Noble the Professor

Vivacious Lady is entertainment of the highest order and broadest appeal.

Rogers is the accomplished centrepiece of the film, slightly atypical as the soft-focus romantic heroine, but with welcome eruptions of her tough and shrewd persona throughout.

Vintage George Stevens comedy, dating from the brief period in which his deliberate style was a deepening virtue, stopping short of the ossification that cursed his later work.

This romantic comedy by George Stevens makes me irresistible. When I witness the wonderful chemistry between James Stewart and the beautiful Ginger Rogers, I have no time for anything other than the story of the protagonists. [Full review in Spanish]

The cast of Vivacious Lady is considerably better than its story. In fact, the acting is so good that it almost lifts a rather farfetched bedroom farce into grade A comedy.

Although the star power is more than adequate here, the real heavy lifting is done by the writing staff whose purpose is to find reasons enough for coitus interruptus, over and over again, enabling the tension dynamic of the whole piece. How long can they do it? They do it for the length of the film. It gets tiresome after a bit, as it should.

I have troubles rating old movies very highly. I guess it is a product of their times, but the stories are quite simplistic. All the fuss because the younger Morgan can't come out and tell his parents that he is married.

rarely seen screwball comedy and the only screen pairing of rogers and stewart who were dating at the time. after a whirlwind romance, botany professor stewart tries to introduce his new bride, nightclub singer rogers, to the stuffy academic crowd, especially his father, university president charles coburn. many fun scenes and great chemistry among the cast. u just can't go wrong with drunk jimmy stewart