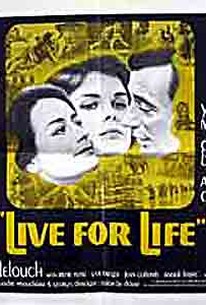 French director Claude Lelouch followed up his hit A Man and a Woman with this tale of a love triangle set against the background of late 1960s political unrest. A French television reporter, Robert Colomb (Yves Montand), on assignment in Kenya, has an affair with a young fashion model, Candice (Candice Bergen). He returns to Paris and tries to reinvigorate his marriage to Catherine (Annie Girardot) by going on a second honeymoon. But Candice follows him to Paris and they resume their affair. Many more romantic entanglements follow. The movie was nominated for an Oscar for Best Foreign Film. ~ Michael Betzold, Rovi

Maurice Séveno
as Himself
View All

[Live for Life] has all of the faults of A Man and a Women and none of the virtues and is an ugly and corrupt film which pretends to be beautiful and ethical.

There are no featured reviews for Vivre pour Vivre (Live for Life) at this time.