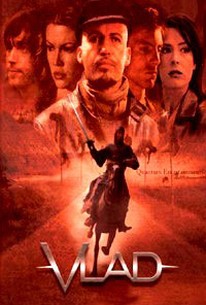 Directed by former CIA officer Michael Sellers, Vlad chronicles the far-reaching consequences of a professor's (Child's Play veteran Brad Dourif) request that his students visit the tomb of the infamous Vlad Drakul (aka Vlad the Impaler). Known as one of the cruelest figures in world history, Drakul's reputation for dismembering his victims ultimately led to the belief that he himself may have been a vampire -- he was, in fact, the inspiration for Bram Stoker's Dracula. With this in mind, four foreign-exchange students, along with their Romanian tour guide (Billy Zane), venture into the bowels of Drakul's final resting place. When the students come into contact with a legendary necklace, they realize that its rumored ability to traverse throughout time and space is no myth. Vlad features performances from Kam Heskin, Monica Davidescu, Nicholas Irons, and Paul Popowich.

It boasts enough camp, skin and 15th century flashbacks of torment to make it fitting fodder for campus screens.

Shot stylishly on location in Romania, and its authentic locales are its strongest asset, but its trite framing story and stilted, colorless dialogue lend themselves to unintended humor.

The story is incredibly slow-paced with its often unexciting and lackluster "action" sequences...

The horror aspects are dark and hard-hitting without being gratuitous.

It all adds up to pleasantly nonsensical mayhem.

A very poor film considering the cast! Was hoping for a good vampire slasher type film.....but barely anything happens until the last 10mins!