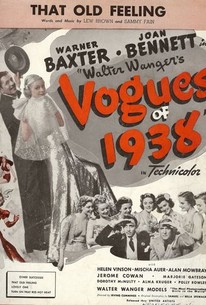 In this musical, a woman angers her boss by going to work as a fashion model. The story features many of the most popular styles of 1937 as presented by the year's most famous models. Songs include: "That Old Feeling" (Lew Brown, Sammy Fain, sung by Virginia Verrill), which earned an Oscar nomination. Other songs include "Lovely One" (Frank Loesser, Manning Sherwin), "Turn on the Red Hot Heat (Burn the Blues Away)" (Paul Francis Webster, Louis Alter), "King of Jam" (Alter).

Charles Williams
as Customs Man in Fall Show
View All

Critic Reviews for Vogues of 1938

There are no critic reviews yet for Vogues of 1938. Keep checking Rotten Tomatoes for updates!

Audience Reviews for Vogues of 1938

There are no featured audience reviews yet. Click the link below to see what others say about Vogues of 1938!