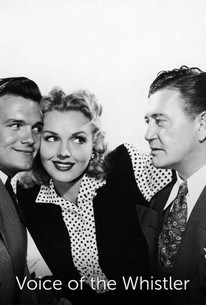 Voice of the Whistler Photos

In this drama based on a popular radio series, a millionaire believes he has six months left to live and so marries his nurse. She doesn't love him, but he has promised to make her the sole heir to his fortune. She leaves her real fiancé for the ailing magnate with the promise that she will return a rich woman. After the wedding, they move to a lonely lighthouse where the woman finds herself falling in love with her husband after he miraculously recovers. Things are fine until the jealous, jilted fiancé comes to try and kill the millionaire. He ends up being killed by the husband who is sentenced to die in the electric chair. The woman is left to live alone in the lighthouse.

James B. Cardwell
as Fred Graham

Critic Reviews for Voice of the Whistler

Juicy crime drama based on the popular radio series of the 1940s.

Audience Reviews for Voice of the Whistler

Another great entry in this series.

Voice of the Whistler Quotes