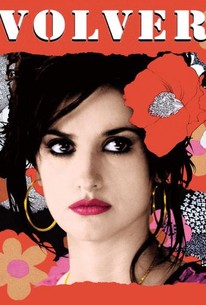 Critics Consensus: Volver catches director Pedro Almodovar and star Penelope Cruz at the peak of their respective powers, in service of a layered, thought-provoking film.

Critics Consensus: Volver catches director Pedro Almodovar and star Penelope Cruz at the peak of their respective powers, in service of a layered, thought-provoking film.

Critic Consensus: Volver catches director Pedro Almodovar and star Penelope Cruz at the peak of their respective powers, in service of a layered, thought-provoking film.

Set in Spain, this is a generational story of three women: a good mother who is desperately in love with a man who is far from being a saint; a young mother carrying a hard life upon her shoulders; and an illegal hairdresser whose shop is the meeting point for all the neighborhood gossips.

As emotionally devastating as it is visually stunning.

It's up to charm to twinkle our attention away from the loose threads and daytime TV plotting.

Even if Volver sounds too high-concept for you, know that Almodóvar is smart enough not to rest on laughs alone, extending his premise to dark, though occasionally tidy psychological territory.

It's clever and entertaining. It's marvelously deft, but never daffy. It works well enough, despite feeling like the most conventional film this great, envelope-pushing Spanish director has ever made.

It's a playful soap-opera, mad with colour and crazy twists. It's a ghost story that won't give you the chills. And most importantly of all, it's yet another fine movie from Spanish master Pedro Almodovar.

Almodóvar's tribute to mother love is overflowing with the anguish and ecstasy of life.

The film is, almost by definition, deeper, more intelligent, more nuanced and more beautifully filmed than at least 95 percent of the movies coming out of Hollywood - if not more.

This is a woman's picture in the best sense of the term, anchored by bravura turns from Penelope Cruz and Carmen Maura. Something of a departure for the Spanish auteur, it also seals his status as a cinematic master. Never that this was much in doubt.

Almodóvar himself once again returning, with delicious self-consciousness, to an old plot. . . and reconfiguring it, as he does here even more radically than in his other recent films, in the subtle but provocative manner of his mature style.

This film is very morbid but easily whimsical as well. Utilizing the culturally significant magic realism, the film deals with the beautiful concept of resurrection through familiar ties, but also brings up a lot of unsavory subjects. Just to name a few there's murder, incest, rape, and arson. Even though the pit of your stomach roils in waves at times, much of this feels very loving. The film is about the language of death, and how it can be translated by the living. Aiding in this interpretation is the way the dead are celebrated and remembered at their graves by their loved ones. The very beginning of the film starts in a graveyard, and throughout the film the imagery of morbidity strengthens itself by showing ghosts, white haired poltergeists, and bold colors that look an awful lot like blood. The main characters are sisters Raimunda (Cruz) and Sole (Duenas), who have different interpretations of their parent's deaths so many years ago. While one only wants to remember and sympathize with her mother, the other wants to romanticize the past rather than feel the pain she has buried for so long. The characters keep the story lively as they speak about their pasts, about how they see themselves through their descendant's eyes, and how their futures could be brightened through their own fates. Raimunda finally takes charge of her life after being smothered by the influence of her husband Paco (de la Torre) and Sole finds herself leaving her hardened shell and embracing her mother for the first time. The links between the family are interesting, but it's the twist ending that really cements this as an impressive study of life among Spanish women. Besides the mood of the film, it's really an interesting visual experience, and that lends to its rural atmosphere and ability to show the lives of women who have lost it all, but gained so much more.

Perhaps the best film I've ever seen with a intended "feminist agenda" (whatever that is, I don't know for sure) while never didactic, three generations of ladies endeavour mightily to overcome inbred male masochism to learn to enjoy life! Really enjoyable performances and story ... and Penolope Cruz radiant with high octane jungle juice. And I become yet another fan of Almodovar.

Its a real domestic film that hits many issues like home, family, and life. Penelope Cruz's performance was fantastic as well as Almodvar's directing. A great watch!

A high rating mostly for the way in which this plot manages to turn and return so seamlessly, covering all kinds of ground: abuse, poverty, murder, cancer, familial bonds, lies, secrets, love and more. As always, Almodovar's characters are very rigid people, set in their ways and keeping their walls up, focused on one thing, and in Volver, Penelope Cruz plays one of the most impenetrable characters I've ever seen on film. She's so beautiful and she's struggling, so everyone would want to help her, but - without giving away too much of the plot! - she has a secret that she must do everything to keep. A bit slow in the early going, but the intensity continues to rise until the film's conclusion, which if you're not careful, will make your head spin. For me it all started to sink in as the credits rolled, and I found myself nodding, slowly coming around, saying "Yes, that was a good ending" each time I followed another thread to its end. A director whose work I will soon delve into deeply, no question. A very good film.