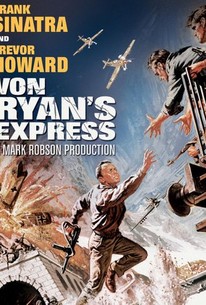 Von Ryan's Express is a fast-paced, well-acted World War II drama, featuring a squadron of Allied soldiers trying to escape a prison camp in Italy. While most of the prisoners at the camp are British, a determined, resourceful American Air Force colonel (Frank Sinatra) takes charge and leads the escape, which requires that the prisoners wrest control of a German train and propel it through Italy to Switzerland. The subsequent ride, featuring good special effects and outstanding stunt work, is great fun and very suspenseful. Frank Sinatra makes an effective action hero aided by veteran actor Trevor Howard as a British officer. The CinemaScope photography is outstanding and director Mark Robson directs the exciting action sequences with skill. ~ Linda Rasmussen, Rovi

James B. Sikking
as American Soldier

Bob Rosen
as POW Who Opens Sweatbox
View All

If not quite Hollywood at its best, this hair-raising film about a mass escape of Allied war prisoners in Italy in 1943 should please most action fans.

After a sluggish beginning, Express starts to swing, and Frank swings with it

Mark Robson has made realistic use of the actual Italian setting of the David Westheimer novel in garmenting his action in hard-hitting direction and sharply-drawn performances.

As much fun as an old-time serial.

The scenery is the only thing authentic and believable in the film.

...as propulsive as the title suggests...

The film only pretends, and manages, to entertain, nothing more. [Full Review in Spanish]

A very successful mixture of The Train and The Great Escape.

Sinatra's character is unusually uncompromising, even for him, and the star delivers one of his best performances.

The cinematography and the scenery both add greatly to the movie. It makes it seem so much more realistic.

A far-fetched but thrilling World War II adventure. Watch it as part of a double feature with John Frankenheimer's The Train.

Well made escape film starts out very well drags here and there but is an enjoyable experience overall.

Great tale of escape - underrated and not given enuff credit - Sinatra acts as good as he sings.