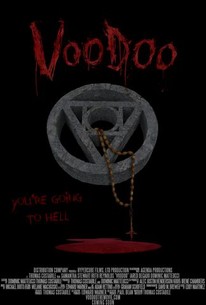 VOODOO tells the story of an innocent southern girl, Dani, vacationing in Los Angeles to evade her increasingly complicated life. Once Dani arrives in Los Angeles, she learns that trying to escape her past is not as easy as she had hoped.

Erin Nordic
as Girl in Hell

Natalia Costabile
as Demon
View All

You really must see this film, if only to sate your morbid curiosity. It's not exactly good, but it is pretty inspired in a very unclean, very unsound way.

Stewart keeps screaming gamely, but the corny horrors she endures are all too tangibly visited on her by a bunch of young performers in black robes and demon makeup ...

Strong lead performances and a startling twist juice up the found-footage exercise "VooDoo," which squeezes unexpected novelty from an exhausted subgenre.

More time should have been spent in the house, building the suspense and dread before moving to the alternate location which could use a few judicious cuts to make it shorts with more impact before getting to that effective, chilling end.

VooDoo, you make it too easy to hate you.

Could've been more effective by dealing closely with plot, rather than becoming a whirlwind of set design, wild sounds, and truly unnecessary nastiness nearing the end.

It's more gimmicky than scary, and little of it makes any sense.

[It's] as if everything is too detached to be interesting. In truth, the film never recovers from Ron Jeremy dancing.

Who do Voodoo? Not you if you value quality horror and your free time.

There are no featured audience reviews yet. Click the link below to see what others say about VooDoo!