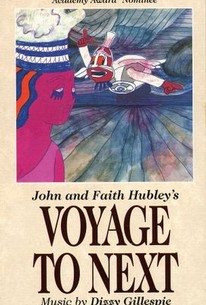 Voyage to Next Photos

This short cartoon with an environmental message, created for the Institute for World Order, is drawn in a style that suggests a melding of African and Native American influences. It opens with Mother Earth drinking water from a river in which square shapes float by; when she exhales, the water she has been drinking forms clouds. Father Time, walking on a strange sun-like treadmill nearby, notices small figures on the squares floating by and asks what they are. They turn out to be primitive humans, sitting around a campfire and sharing their food and resources equitably. Father Time asks what they do if someone gets greedy and tries to take more than his share. Mother Earth explains that it's not in their best interests to do that, but that each day is a choice. Time passes, and humanity becomes less cooperative and more isolated. Mother Earth and Father Time worry that humanity is evolving a system that will ultimately work to their detriment. Mother Earth remains cautiously optimistic that they will make the right choices, but acknowledges that a great deal depends on whether they make those choices in time. Voyage to Next features the talents of Maureen Stapleton and Dizzy Gillespie as Mother Earth and Father Time, with jazz vocalist Dee Dee Bridgewater joining instrumentalists Gillespie and Benny Carter to provide the evocative background score.

Critic Reviews for Voyage to Next

There are no critic reviews yet for Voyage to Next. Keep checking Rotten Tomatoes for updates!

There are no featured reviews for Voyage to Next at this time.

Voyage to Next Quotes