Voyage to the Bottom of the Sea1961 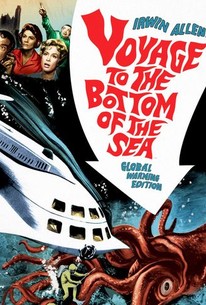 Voyage to the Bottom of the Sea Photos

The basis for the television series of the same name, this film follows the adventures of Admiral Harriman Nelson (Walter Pidgeon) and his crew, as they use a special nuclear submarine to attempt to save the Earth from a deadly belt of radiation, while trying to evade the submarines sent out to stop them.

Critic Reviews for Voyage to the Bottom of the Sea

True science-fiction components are practically missing altogether; it's more of a moderate, procedural, cautionary tale, or even a war movie, than a futuristic adventure.

Walter Pidgeon stars as the sub commander, a pre-I Dream of Jeannie Barbara Eden plays his secretary, and Peter Lorre amuses as a brilliant scientist.

The science in the movie is crazy bad. The special effects are cheesy and laughable. But, it's campy and fun.

Irwin Allen's "Voyage to the Bottom of the Sea" may be a campy affair, but you've got to give them credit for talking about climate change at least 30 years before it became a "hot" topic in the scientific community.

"Voyage to the Bottom of the Sea" has an interesting premise, but the problem lies in giving the crew something to do on their way to carry out their mission.

It's a film to be enjoyed for its DeLuxe Technicolor eye candy visuals.

It's the fantastic situations that give you the feeling all this excitement just maybe could be real.

Audience Reviews for Voyage to the Bottom of the Sea

Irwin Allen (a poor man's Cecil B. DeMille) wrote and directed this nearly hysterical, breakfast cereal of a "big movie". I actually felt sorry for the actors for having to spout some of the the lines! Farfetched and ridiculous, I was wondering why I hung with it even as, like with the previously mentioned breakfast cereal, I took the next bite. Perfect for Saturday morning, here is a campy classic. Prepare to groan mightily!

Absolutely ridiculous -- but in a fun and naively unaware way. The science in this sci-fi seems to come from a complete misunderstanding of a third grade textbook. The special effects are what Dana Carvey's Church Lady might have called "special". The ever-present smoking and array of ashtrays on this film's nuclear sub are bewildering. Still, it's all done in such a blissfully, innocent way that the film is actually somewhat engaging and enjoyable. And then, of course, there's dreamy Frankie Avalon taking his shirt off and mellifluously over-singing the Pollyanna-ish title credits theme song, so it really can't be that bad.

The film that kick started the long long long TV series that was basically Star Trek under the sea. So the success of this film of course lead to the TV show which in turn was a big success and encouraged the creator Irwin Allen to go ahead and make other sci-fi TV series that all had a similar look and feel about them...'Lost In Space' 'Land of the Giants' and 'The Time Tunnel'. So this original film was the spark that ignited a whole genre of classic TV. Yet despite all that...holy crapenstein this film was errrr...crap!. Now I've seen a lot of these old fantasy flicks from the 60's but this has to be the most boring sci-fi I've ever seen I kid you not. The plot is nuts, something about a meteor shower that is on fire threatening the Earth with an extreme rise in heat temperatures. So the Captain of this fancy ass submarine comes up with a plan to extinguish these flaming meteors by firing a nuke at them on a certain day and at a certain time. It has to be this exact time and day so the nuke will put out the flames and blast the meteors back into space. Wut?? say again? repeat all after the plot is nuts. The 'excitement' comes from the fact that this plan is rejected (really?) and only the US President can authorise it. So the devious Captain ignores this, gets his sub into position and tries to get in contact with El Presidente before the time slot is missed, of course there is a saboteur on board which makes things even more exciting!. I mean seriously there is nothing happening in this film! the plot is too stupid for words and makes no sense. When you watch the film you do agree with UN that the main plan is nuts and its probably best to leave the meteors alone. So you spend the entire film thinking this bunch of sailors on this fancy sub are doing something really really dangerous and stupid...without permission!. Of course we all know it will work but you still know its utterly stupid. There are various issues the subs crew must battle against to try and complete their illegal mission, typical stuff like under sea mines, debris, a mutiny, equipment being damaged blah blah blah, oh and a giant squid attack too. Yep that's right, you can't have an underwater adventure without a giant sea beast of some sort attacking the main vessel. So right away that compromises the films semi realistic approach, at first I thought it was sort of serious, outlandish sci-fi but kinda serious with sensible elements. The giant squid kinda turns the whole thing into complete fantasy and ruins that feel, I mean what next? mermaids saving the crew?. I think one of the main issues for me was the fact the film just looks totally dull, the action is lifeless and visually its just bland and plain. All the sets are clearly sets (they used the same sets for the TV show), the colours are stale, the costumes are drab, the sub model looks like something you'd see in 'Flesh Gordon' (a dildo with a windscreen) and most of the film is set within this monochrome tin can. I get the feeling the sub has been designed like a spacecraft, sleek, smooth and intimidating like a shark, as apposed to the steampunk-like design of the classic 'Nautilus'. A wondrous and fantastical craft ready to set sail into unknown deep sea adventures...so what happened?. There are a few scenes outside the sub but nothing much inspiring goes on, the only sequence with some life is the squid attack naturally...but don't go expecting anything of Disney standards now. Imagine the original Star Trek show but without any planet hopping or alien encounters, just the crew on the ship having mechanical issues and chats...constantly. Yep well this is pretty much this film to a tee, a tonne of blokes on a sub with the obligatory blonde female sidekick doing virtually nothing but talk, with the odd shaky cam action sequence for good measure (with obligatory red flashing emergency light). I don't think any of this film cast star in the TV show, but it really doesn't matter as even the likes of Peter Lorre can't make this film any better. The films title sounds awesome and thrilling, how wrong could it be!. I was straining to get through this, I do recall the TV show being pretty boring when I was a kid but I hoped this would be much better seeing as it was the acorn that spawned the oak tree. I can't see how this was popular I really can't, there were so many other better fantasy/sci-fi films out around this time and this film totally pales in comparison.

Yes, there's a cool cast, but the story is stupid and it's a boring submarine movie too. As much as I enjoyed seeing Lorre, Fontaine, Eden, Pidgeon, Sterling, and Avalon in a movie together, the movie itself wasn't worthy of having them in it. I don't recommend this movie.

Voyage to the Bottom of the Sea Quotes