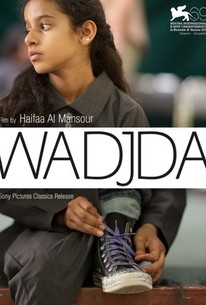 Critics Consensus: Transgressive in the best possible way, Wadjda presents a startlingly assured new voice from a corner of the globe where cinema has been all but silenced.

Critics Consensus: Transgressive in the best possible way, Wadjda presents a startlingly assured new voice from a corner of the globe where cinema has been all but silenced.

Critic Consensus: Transgressive in the best possible way, Wadjda presents a startlingly assured new voice from a corner of the globe where cinema has been all but silenced.

WADJDA is a movie of firsts. This first feature film shot entirely in Saudi Arabia is the story of a young girl living in a suburb of Riyadh determined to raise enough money to buy a bike in a society that sees bicycles as dangerous to a girl's virtue. Even more impressive, WADJDA is the first feature film made by a female Saudi filmmaker. In a country where cinemas are banned and women cannot drive or vote, writer- director Haifaa Al Mansour has broken many barriers with her new film. (c) Sony Classics

Wadjda builds a complex portrait of a place and people around a simple story.

A moving film that is punctuated by two heartening debut performances Wadjda never stops to second guess itself in its intent or declaration.

It's a provocative but credible premise and in exploring it, Al Mansour has come up with an engagingly subversive character. Wadjda is a delight.

Films like these are insightful and useful instruments for change.

For years, aspiring feminists had Jo March; now, we have Wadjda. [TOP 50 FILMS OF THE DECADE]

Haifaa Al Mansour is clearly one those people who will change the world, both within the Arab world and outside. This is Wadjda, hear her roar!!!

Something kind of radical, a quiet rebuke of repressive religious values that make no sense in a modern world.

Wadjda isn't angry or sentimental. Rather it ends up being a heart-warming and positive story with some laughs and tears along the way.

Wadjda is unstoppable, and the character will no doubt serve to empower many young Saudi girls.

Wadjda is not only a surprising milestone for being the first film shot entirely in Saudi Arabia and made by a female director, but is above all a marvelous cultural record that allows us to peek into this very unfamiliar and oppressive society in an incredibly heartfelt and absorbing way.

The first film to be entirely filmed in Saudi Arabia, by a female director at that, Wadjda is a human story about the emotional burdens of life in the Middle East, and the problems that stem from being a female in that environment. It seems that the characters are written to be shown to an American audience, so they have seemingly quirky character traits; like Wadjda wears Chuck Taylors and her father plays video games. The story follows Wadjda and her friend, who she wants to race on a bicycle, though it's disgraceful for girls to ride a bike in her country. She tries to make the money to buy it by entering a contest to recite the Koran (Quran). The film also shows the struggles of women supporting their children single-handedly, and how life truly operates in Saudi Arabia, as well as showing a more empathetic portrayal of its native citizens. The story may be simple, but this is a groundbreaking and unprecedented film.

Writer-director Haifaa Al-Mansour does the impossible. She has produced a film in a country with no film industry to speak of. Add that she is female in a community where women are forbidden to publicly interact with unrelated men. Wadjda is fascinating because it does two things brilliantly. One, it offers a gripping narrative of a captivating character. Secondly it also serves as a document of Saudi society. The director even fashions a climactic Koran recital contest as an edge-of-your-seat nail-biter. We get an expert's view from the inside. The presentation of culture was a real eye opener for this critic. The strict moral codes might be described as oppressive, yet the milieu never reads that way. Joyful, effervescent and uplifting, this is about the triumph of the human spirit. How one rebellious little girl deals with her innocent desire to simply own a bike. Saudis can still watch movies via satellite, DVD and video in the privacy of their own homes. Perhaps one day they will be able to see this in a cinema. You however don't have that problem. Please exercise that right and see this film. fastfilmreviews.wordpress.com

A powerful Saudi feel good movie about a conservative culture in motion. Definitely my favorite movie at the mini-version of the Rotterdam Film Festival in my country. I don't want to ruin it by telling what it's about. I'll conclude by saying that it's the first feature film made in Saudi Arabia directed by the first female Saudi filmmaker.