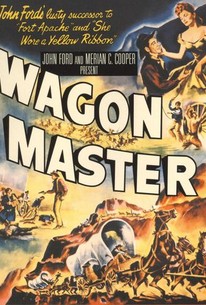 Wagon Master, splendidly directed by John Ford, is a superlative western. The film is the outwardly simple tale of a Mormon wagon train headed for Utah. Along the way, the group, led by Elder Wiggs (Ward Bond) hook up with two horse traders Travis Blue (Ben Johnson) and Sandy Owens (Harry Carey Jr), the members of a traveling medicine show and a tribe of Navajo Indians. The group is threatened by a gang, known as the Clegg family, who have robbed an express office and murdered the clerk. This wonderful film emphasizes the virtues of solidarity, sacrifice and tolerance, and shows John Ford at his most masterful, in total control of the production from the casting to the bit players to the grandeur and scope of the visual compositions. The film, with its breathtaking scenery, brilliant performances by a cast of character actors, and an engaging sense of humor, is a superlative example of the American western. Wagonmaster inspired the television series Wagon Train and was also shown in a computer-colorized version ~ Linda Rasmussen, Rovi

Chuck Hayward
as Jackson
View All

Cinematographer Bert Glennon comes up with a number of impressive artistic compositions, although the film's biggest treat is seeing Ben Johnson given the opportunity to show off his sly charm and easygoing demeanor.

This may be the closest Ford ever got to making a musical.

Ford considered it among his personal favorites, and a handful of Ford's biggest admirers consider it a neglected masterpiece. (I do too.)

It's as gentle and warm a film as [John Ford] ever made and it follows a classic Ford theme: the creation of a community in the west...

one of Ford's masterworks, a sublime, crisp, unpretentious western that doesn't wear its mythos on its sleeve

It's one of the most likable of all the Westerns directed by John Ford.

Sometimes you just need a Western - imagining yourself being Ben Johnson for a couple hours. Simple and good.