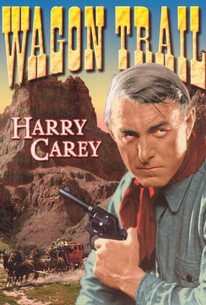 Weatherbeaten western star Harry Carey is the glue that holds the low-budget Wagon Trail together. Carey plays a sheriff who is forced to pay dearly for crimes allegedly committed by his son Ed Norris. The actual miscreant is "solid citizen" Earl Dwyre, who is given Carey's job. With only 55 minutes' worth of screen time at his disposal, Carey must wrap this one up at double speed. The script's disposal of villain Dwyre is a novelty for a B western, and one that shouldn't be given a try at home.

There are no critic reviews yet for Wagon Trail. Keep checking Rotten Tomatoes for updates!

There are no featured reviews for Wagon Trail at this time.