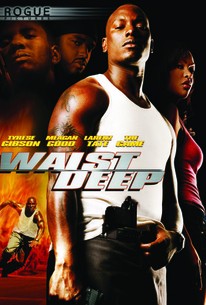 Critics Consensus: A well-meaning B-movie that suffers from a cliche-ridden script and poorly drawn characters that fail to inspire much sympathy.

Critics Consensus: A well-meaning B-movie that suffers from a cliche-ridden script and poorly drawn characters that fail to inspire much sympathy.

Critic Consensus: A well-meaning B-movie that suffers from a cliche-ridden script and poorly drawn characters that fail to inspire much sympathy.

To save his son from ruthless gangsters, a streetwise ex-con finds himself coerced into performing a series of crimes in this gritty thriller. Waist Deep features Tyrese Gibson as O2, a young father and recent parolee whose life on the outside is upended when his young son Junior is taken hostage after an auto-theft gone wrong. After learning that his boy is in the hands of a mob boss named Meat (The Game), O2 is forced to break the law once again to satisfy his demands, and teams up with Coco (Meagan Good), a hooker with ties to Meat, to get into the gangster's inner sanctum and save his son. Waist Deep marked the acting debut of rapper The Game.

The Game
as Meat

Will Young
as Man

The worst is saved for last: just when you think the movie has shown the courage of its 'gritty' convictions, it hits you with schmaltz that would shame a Hallmark card.

From its non-committal title downwards -- we're a bit worse than ankle deep, but not quite neck deep -- the film includes a final shot that is almost surreal in its implausibility. Waist Deep? More like Deep Waste.

The efforts of Waist Deep to make some meaningful social commentary about street gangs and the vicious circle in which African-American men often find themselves seem like an afterthought, rather than anything remotely sincere.

The Game attempts to exude menace through hardcore forehead-wrinkling and gangsta nose-crinkling, but his efforts are more comic than sinister.

For its ever shifting attitudes toward men, women, and murder, Waist Deep is one of the sloppiest movies ever to reach the screen.

Would most likely have made for a decent late-night Cinemax staple, but its stabs at higher significance only bring on the giggles.

A waste of time!

Just looking at the genre, this is a cut above the normal. This is by no means an endorsement of this movie, but it is better than most.

The cast just about escapes with its dignity after this derivative, predictable urban thriller.

Rich Cline
Shadows on the Wall
View All Critic Reviews (76)

His son. His life. His freedom. He's taking them all back. Very good movie. I enjoyed it alot, It had a good conflict from beginning to end which kept you intrigued the whole time. Great ending they way it should be. I gotta say Meagan Good to me is the hottest most sexiest black woman alive, her lips are perfect meant to be kissed, what a body, smoking HOT! In South Los Angeles, while bringing his beloved son Junior back home from school, the paroled ex-convicted O2 promises his son that he would always come back to him and never leave him alone. However, his car is hijacked and Junior is kidnapped. Without any lead, O2 forces the street vendor Coco to help him to find where his car might have been sent for disassembling. Meanwhile, O2's addicted brother Lucky discovers that the cruel leader of the Outlaw Syndicate, the drug lord Meat, is keeping the boy arrested in a room and asking a ransom of US$ 100,000.00 that he believes O2 have from an old heist. O2 and Coco plot a scheme to put the pimp P-Money and Meat against each other and steal their money.

Awful movie. The only bright spot was Meagan Good.

God, I can't believe I paid to see this confused mess of a ghetto action movie. It's predictable, cloying, embarrassingly targeted at a certain audience, and perhaps worst of all - full of product placement. Yes, EVERY prostitute in Los Angeles has a Razr cell phone. Clearly.