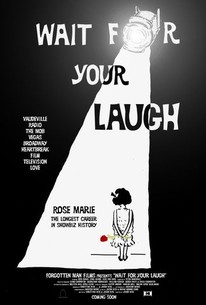 Wait for Your Laugh Videos

Wait for Your Laugh Photos

Rose Marie's rise to fame began at the age of four with her own NBC radio show. As she grew, she went from the stages of Vaudeville to the bright lights of Vegas, to some of the most iconic television shows. But it's not just credits like The Dick Van Dyke Show and Hollywood Squares that make her life so memorable. Characters like Al Capone, Bugsy Siegel, and Jerry Lewis all played a part in this woman's story of fame, love, tragedy, and success. A woman's ninety-year career is also the greatest untold story in Show business.

Critic Reviews for Wait for Your Laugh

Timing is everything in comedy, and according to this nostalgic documentary portrait of Rose Marie, she always knew when to jump to the next big thing.

Basically, it feels as if you're sitting down with Rose Marie for 90 minutes while she talks about her life.

A warm, affectionate smooch of a documentary tribute chronicling "the longest career in showbiz history."

On the whole, "Wait for Your Laugh" is a well-deserved and most enjoyable tribute to a great entertainer of the old school.

"Wait for Your Laugh" pays fond tribute to a tireless trooper whom generations have known mostly as a wisecracking second banana often funnier than the bigger stars she supported.

[Jason] Wise's film is more than a tribute to her-it's a new setting within which, telling the story of her life, she performs again.

The heart and soul of the film belongs to Rose Marie, who is interviewed extensively for the film and has a seemingly endless supply of stories about all of her old pals and peers

Befitting its subject, the documentary "Wait for Your Laugh" is a breezy and engaging whirlwind trip through the crowded life of a performer who pretty much embodies the show-business term "trouper."

As a recap of a monumental, astoundingly rich life, Wait for Your Laugh is a marvel.

... her fight to control her own career and image, and to strive for success beyond "typical" female roles remains a contemporary struggle.

Audience Reviews for Wait for Your Laugh

There are no featured audience reviews yet. Click the link below to see what others say about Wait for Your Laugh!

Wait for Your Laugh Quotes