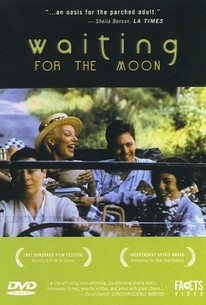 Well into the 1930s, there was an expatriate community of Americans who lived in Paris or the French countryside, and who eventually became influential artists and writers. These included the painter Edward Hopper, the writer Ernest Hemingway, and the musician Virgil Thomson. Writer and poet Gertrude Stein and her lifelong companion Alice B. Toklas (perhaps best known for her marijuana recipes) were the patrons of these and other artists, including Guillaume Apollinaire. In this PBS American Playhouse movie, the two are seen in the mid-1930s, and the unflinching loyalty and love that Toklas (Linda Hunt) offered to her irascible companion Stein (Linda Bassett) is the subject of this moving, extremely erudite drama.

Linda Hunt
as Alice B. Toklas

Critic Reviews for Waiting for the Moon

''Waiting for the Moon'' drifts lazily, with the camera taking long rests on the faces of the principals.

Highly textured exploration of some of the ways in which women love and help one another.

Almost contemptuous of fact, this unconvincing lesbian romance opts for a soft, amorphous approach in depicting the elationship between the writer-emigre Gertrude Stein and longtime companion Alice B. Toklas.

Beautifully conveys that special feeling when two separate individuals find themselves at one with each other and the world.

Audience Reviews for Waiting for the Moon

There are no featured audience reviews yet. Click the link below to see what others say about Waiting for the Moon!

Waiting for the Moon Quotes