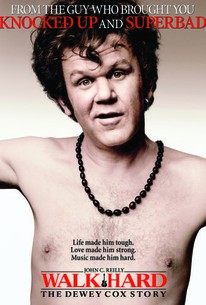 Critics Consensus: A parody that pokes fun at rock stars and reductive biopics alike, this comedy sings in large part because of stellar performances and clever original music.

Critics Consensus: A parody that pokes fun at rock stars and reductive biopics alike, this comedy sings in large part because of stellar performances and clever original music.

Critic Consensus: A parody that pokes fun at rock stars and reductive biopics alike, this comedy sings in large part because of stellar performances and clever original music.

America loves Dewey Cox! But behind the music is the up-and-down-and-up-again story of a musician whose songs would change a nation. On his rock 'n roll spiral, Cox sleeps with 411 women, marries three times, has 22 kids and 14 stepkids, stars in his own '70s TV show, collects friends ranging from Elvis to the Beatles to a chimp, and gets addicted to--and then kicks--every drug known to man. But despite it all, Cox grows into a national icon and eventually earns the love of a good woman--longtime backup singer Darlene.

E.J. Callahan
as Man No.2 at Talent Show

John Ennis
as The Big Bopper

Willow Geer
as Nurse at Rehab

David Doty
as Doctor at Rehab

Jack Kehler
as Reporter No.1

Gerry Bednob
as The Maharishi

Tim Bagley
as Engineer No.1

Eddie Vedder
as Himself

Jackson Browne
as Himself

Ghostface Killah
as Himself

Lyle Lovett
as Himself

The only gale-force laughter in later scenes comes when the hero meets the Beatles.

... starts out brilliantly playing with the tired tropes of musical biopics before utterly losing its way.

The end of a golden run for Judd Apatow.

Some laughs, but you expect more from Apatow.

Reilly, one of our best supporting actors graduating to star status, finally bound for glory.

It's safe to call this film a modern classic by now, I think.

The extreme absurdity pervading much of Cox's life generates many small laughs, but is unable to land enough big moments to stand out.

Better than expected on the strength of John C. Reilly's Golden Globe-nominated performance.

Like the drunk guy who squeezes your arm and tells the same joke over and over until you laugh, goddamn you, laugh!

The entire film has three repetitive jokes: Dewey cut his brother in half, Dewey can't smell, and he's going to take drugs. So it's kind of amazing how well the film works.

Eddie Vedder: If Elvis and Buddy Holly are the Cain and Abel of rock and roll, Bruce Springsteen is Zachariah, Iggy Pop is Methuselah, and, of course, Neil Young is the wise prophet Ezekiel, then what does that make Dewey Cox?  "Life made him tough. Love made him strong. Music made him hard." I absolutely love Walk Hard, and I always have. I saw this on opening night and since then I've probably watched it at least 20 times. It's one of those movies my friends and I used to always watch when we got stoned and/or drunk. I still think it is one of the funniest movies I have ever seen. It's a perfect spoof of the musician biography film. We see references to Johnny Cash, Bob Dylan, The Beatles, Elvis, The Big Bopper, Buddy Holly and countless more. This is a music lovers film. We see the rise and fall and rise and fall of Dewey Cox from when he is a young boy and cut his brother in half to his final live appearance ever. In between he enjoys everything a rock star does. He gets into drugs and goes to rehab not once, but twice. He fucks every girl he can. He gets married and divorced twice. He has over thirty children. His life is a mess as he falls from stardom, but don't worry. Every fallen hero gets his chance at redemption and Dewey Cox is no different.  The humor on this one is mostly lowbrow stuff, but there is some smart comedy in it if you get the jokes. Judd Apatow writes an amazing script here using movies like Walk the Line and Ray as inspiration for mimicry. The use of stars throughout the film is hilarious. They present them in the exact way people perceive them to be. Ringo is always wanting to do LSD. Elvis is eccentric and full of himself. Buddy Holly is a real nice guy. This has its music history down pat. I especially loved the small glimpse of The Big Bopper doing a set.  From start to finish, this is a comedy I adore. The fact that I still laugh at 90% of this films jokes after numerous viewings goes to show just how funny the film is. I must say John C. Reilly is perfect in this role. I couldn't think of anyone who could have done it better or funnier. He's absolutely perfect.

John C. Reily never dissappoints when he's in a lead role. I loved Step Brothers and Cyrus, I have now found another Reilly favourite. One of the best musicals I have ever seen. Walk Hard has a clever original soundtrack, genuine belly laughs and manages to hold the illusion that the events actually happened in a true biopic style.

What a hilarious movie. Such a good parody with a great and big cast! Never seen Jenna Fischer in a role like that. I like it. The Beatles were SO funny! Ringo was the best. John C. Reilly's performance was no less then god-like. I highly recommend this.

Couple laughs and a few chuckles. Music was pretty well done but overall just too predictable.