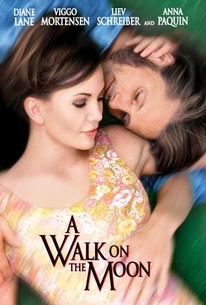 Critics Consensus: An impressive showcase for Diane Lane and an assured debut from director Tony Goldwyn, A Walk on the Moon finds absorbing period drama within a family at a crossroads.

Critics Consensus: An impressive showcase for Diane Lane and an assured debut from director Tony Goldwyn, A Walk on the Moon finds absorbing period drama within a family at a crossroads.

Critic Consensus: An impressive showcase for Diane Lane and an assured debut from director Tony Goldwyn, A Walk on the Moon finds absorbing period drama within a family at a crossroads.

A Walk on the Moon Photos

Tony Goldwyn's A Walk on the Moon is a wonderfully realized, nostalgic (if you are as old as I am) melodrama set during the summer of 1969. It is a time of change across America--sex, drugs, and rock 'n' roll--and a historic year in the space program, but not everything is in upheaval. Pearl Katrowitz, a thirty-year-old Brooklyn housewife (Diane Lane), is spending the summer, as she has for the last decade, at Dr. Fleigel's Bungalow Colony in the Catskills. Along with her daughter, son, and mother-in-law, she waits dutifully for her husband's weekend visits, commuting from his job in New York City. The insularity of the camp is interrupted only by calls from the traveling salesman, the "ice cream man," "the knish man," or "the dress man." On one of these occasions, Pearl meets "the blouse man," Walker (Viggo Mortensen). Both hip and sexy, he is at first just casually friendly. But it rapidly becomes evident that the undercurrent of sexual tension won't disappear, and the steamy love affair that ensues changes the lives of everyone involved. With a tone that is romantic yet very authentic, Goldwyn creates a charmingly comic but intense love story that interweaves coming of age for Pearl's newly adolescent daughter with Pearl's own trek toward self-realization. Against the backdrop of Woodstock, and with Lane's complex, yet compelling, sexuality, Goldwyn's storytelling avoids the era's easy cliches to offer a memorable and satisfying look back at the time when change was in the air.

Bill Brownstein
as Customer No. 1

Sam Gesser
as Customer No. 2
View All

Critic Reviews for A Walk on the Moon

Somewhere in the midst of the dramaturgy is a fine performance by Anna Paquin as a teenage girl struggling with new ideas and raging hormones. Every time I saw her character onscreen, I thought: There's the real story.

Mortensen as Lane's clandestine love interest is nothing but a symbol of beauty and freedom.

Romance novel material, albeit it gussied up in a handsome, well-made package.

How many films are about a woman's sexual awakening? A film that puts a woman's desire before family without offering a moral judgment or offering a male fantasy?

would make a fine companion piece to Ang Lee's 'The Ice Storm,' another tale of unhappy people trying to find themselves -- or lose themselves -- in other people's beds.

Actor Tony Goldwyn makes a striking directorial debut with the deeply nostalgic, truly heartwarming A Walk on the Moon.

A beautifully acted drama about infidelity in the summer of 1969 when astronauts landed on the moon and the counterculture celebrated sexual liberation at Woodstock.

Audience Reviews for A Walk on the Moon

Great acting in a drama about relationships - in 1969. Unfortunately, I remember those times, and I have spent holidays in camps like is featured in the movie. You really feel for the characters - and Diane Lane and Anna Paquin - mother and daughter - both struggle with love and sex this one summer.

This movie is about a woman who has second thoughts about her married life when she meets a handsome t-shirt salesman. A Walk on the Moon is a great movie which touches a lot of morality subjects that are super relevant to our society today. Today there are too many adult people acting like teenagers and letting themselves get sucked in to the vortex of the irresponsible and untied life. A part of maturing is realizing that you can't do whatever you want whenever you feel like it, you have to consider the people around you when you're making important decisions and you must not be reckless. I think this movie teaches some great lessons about immaturity and loyalty. It teaches about responsibilities and what happens if you abuse the responsibility you have. I love Liev Schreiber and Viggo Mortensen, and they're really bringing the best to this movie.

an unexpected gem with a typically outstanding performance from Diane Lane.

[font=Century Gothic]In "A Walk on the Moon", it is 1969 and Pearl(Diane Lane) and Marty Kantrowitz(Liev Schrieber), their children, Allison(Anna Paquin) and Daniel(Bobby Boniello), and Marty's mother(Tovah Feldshuh), are vacationing in the Catskills where they spend every summer. Marty who works as a television repairman tries to make it up there every weekend from New York City but cannot one time due to overwhelming demand at his shop in the days leading up to the moon landing. Left to her own devices, Pearl seeks the company of Walker(Viggo Mortensen), the handsome new blouse man...[/font] [font=Century Gothic][/font] [font=Century Gothic]"A Walk on the Moon" is a facile and one-sided take on such overly familiar themes as infidelity and thwarted dreams that wastes a very fine cast in the bargain. The only reason for setting the movie in 1969 is as a reaction against the personal and political liberation of the time. On the one hand, it dives head first into the cliches of the time(Woodstock but it does get points for mentioning the Mets) but also thankfully points out that not everybody back then were hippies.(My parents certainly were not, even if I am.)[/font]

A Walk on the Moon Quotes