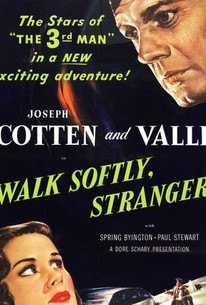 Joseph Cotten stars in Walk Softly, Stranger as Chris Hale, a fugitive criminal who decides to hide out in a small Midwestern town. Here, Hale makes the acquaintance of Elaine Corelli (Alida Valli), who has had a grudge against the world since being crippled in a skiing accident. While endeavoring to help Elaine come out of her shell, Hale falls in love with her, and vows to mend his own ways. Though not released until 1950, Walk Softly, Stranger was filmed in 1948, a year before Joseph Cotten and Alida Valli were teamed in the more celebrated The Third Man. Future talk-show host Jack Paar appears in a fascinating supporting role as a suburban hubby. Walk Softly, Stranger was the last co-production between RKO and David O. Selznick's Vanguard Films.

Robert Ellis
as Boy
View All

There are no featured reviews for Walk Softly, Stranger at this time.