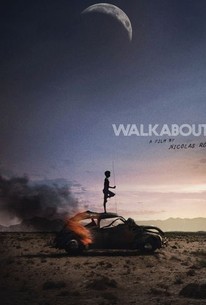 Critics Consensus: With its harrowingly beautiful depiction of the Australian Outback and spare narrative of culture clash, Walkabout is a peculiar survival epic.

Critics Consensus: With its harrowingly beautiful depiction of the Australian Outback and spare narrative of culture clash, Walkabout is a peculiar survival epic.

Critic Consensus: With its harrowingly beautiful depiction of the Australian Outback and spare narrative of culture clash, Walkabout is a peculiar survival epic.

Two young white children (Jenny Agutter and Roeg's son Lucien) stumble upon an adolescent Aborigine (David Gulpilil), who is performing a "walkabout." In this ritualistic six-month journey, the boy must learn to survive by himself in the imposing desert. Communication is a problem, although more for the girl than for her little brother, who still has a child's ability to communicate simply and directly. The two teenagers fail to connect for a variety of reasons, mostly due to the girl's lack of interest in a culture that is unfamiliar and different from her own. Ultimately, the differences become too much to bear, resulting in a tragic conclusion that adds an even more somber denouement to Roeg's already grim vision.

Peter Carver
as No Hoper

Roeg's training as a cinematographer brings both advantages and hazards.

There is always this feeling that Roeg, the cameraman for Fahrenheit 451 and Far from the Madding Crowd has a positive and original talent bursting to be developed. It's just a case of what that talent is going to find to say.

What makes the film triumph over this literalness is another kind of intensity which one feels, since it's a filmmaker's, is all Roeg's.

Beautifully done, I think, with a completely appropriate and consistent style.

...seems to take place somewhere between a pleasant dream and a nightmare.

The film is rich enough, especially at a second look, to make you forget the flaws. You are left with the impression of a fresh, powerful and humane imagination.

A towering work, painted from a palette of feelings and instincts words cannot do justice to.

The film is a forced exposition more than a question, where the solution is found in casting white men as the evil ones and indigenous peoples as too angelical. [Full Review in Spanish]

Walkabout has a good script by Edward Bond, and is directed and stunningly photographed by Nicolas Roeg.

[VIDEO] "Walkabout" is a poetic film that incorporates a collective subconscious of humanist values.

A beautifully photographed film with the backdrop of the Australian outback.

Director Nicolas Roeg's (`Don't Look Now') cinematographic skills and admiration pay especial tribute to Walkabout's powerful combination of Australia's awesome scenic diversity and the sensual Jenny Agutter, and the whole effect is embellished by John Barry's sublimely magical score. I would hasten to add that as well as being very pleasing to watch, enhanced by Roeg's voyeuristic use of the camera, Agutter provides a skilful performance as a prejudiced unworldly teenager, who is naively unaware of the sexuality she exudes whether naked or wearing her high cut school skirt. Although it was a somewhat amusing shock to recently discover that a body double was employed for Agutter in the shower scenes for `An American Werewolf in London', no such deceit was used in this film. Immediately after filming `Walkabout', Agutter reprised her BBC serialisation role of two years earlier as Bobbie for Lionel Jeffries' sumptuous version of Edith Nesbit's `The Railway Children', ensuring her immortalization as an iconographic beauty. She graduated thirty years on into the role of the mother for a Carlton TV production and is currently involved in producing a film script about the life of the author. On a deadly picnic into the desert a father (John Meillon; `Crocodile Dundee') inexplicably snaps, shooting at his two children before torching his car and turning the gun on himself. Now the children, absurdly kitted out in their formal school uniforms, are lost and carelessly lose their provisions, except for the transistor radio with its inane babble being another illustration of how hopeless our technology is against nature. Fortuitously they stumble upon an oasis and find their only saviour in the form of an Aborigine (David Gulpilil; `Rabbit Proof Fence') on a rites-of-passage walkabout. The seven year old boy (Lucien John, the director's son) happily has a child's ability to communicate with the Aborigine despite the language barrier, something his older sister never grasps, deftly demonstrated on their first encounter when she is increasingly frustrated by the lack of comprehension of her demands for water. Roeg crosscuts stunning kaleidoscopic images of the physical landscape and its critters, with the killing of animals and the domestic butchering of joints of meat to give a stark contrast between nature and civilisation. However, given this was his first solo effort, his overworked montages can be a little irritating and confusing, and show off the cinematographer rather than the director in Roeg. The director emphasises the unrealised sexual tension by explicitly marrying shots of both the teenagers with suggestive trees in the form of intertwined human limbs, as well as providing us with a diverting interlude involving a group of meteorologists. The deeply sad misunderstanding of the two cultures gives poignancy to the film that is its strength, especially delineated by the Aborigine's tribal courtship dance for Agutter, which only serves to terrify her and increase her distrust. Her lack of emotion for their former helpmate is staggering. When faced with a dangling corpse the girl asks trivial questions of her brother about his breakfast whilst pointlessly picking ants off the body. The tragic outcome is also indicative of the current state of Aboriginal life expectancy with a higher proportion dying through accident, assault and self-harm than any other Australian demographic group. The failure of her parents to prepare her for the change from childhood may have contributed to the tragedy, and it is only on reflection years later, living the same life as her parents and similarly caged in an apartment block, that Agutter's character senses that maybe she missed her chance. It is interesting to note that the children are deliberately English to highlight the cultural clash between the European settlers and the original inhabitants of this ancient land, and I wonder if similarly white Australians would have had any more understanding of the indigenous customs of the Aborigine boy. `Walkabout' is a far more visual depiction of sexual awakening colliding with alien cultures than that other famous picnic that goes horribly wrong in Peter Weir's `Picnic at Hanging Rock' (which this predates by four years), with its metaphorically implied unease centred on a sacred Aboriginal site that eventually destroys the established order of a Ladies College. `Walkabout' is as relevant today as when it was released in the era of '70's industrialisation with the Kakadu National Park once again under threat from a new uranium mine on its boundary. The Northern Territory's tribe Mirrar is currently involved in this dispute over land rights and excavations, although mining was temporarily ceased on Aboriginal land in the mid 1990's. This is a sensitive issue as Australia's economy relies on the export of uranium in the production of nuclear power, and Aborigines oppose the exploitation of the Earth's resources for profit. The company at the centre of this discord also operates the Ranger mine which is depicted along with the rock band Midnight Oil (well known for their campaigning land rights missive `Beds Are Burning') in eX de Medici's `Nothing's As Precious As A Hole In The Ground', a recent acquisition by Australia's National Portrait Gallery. Despite last year's rush by some of Hollywood's well-known directors returning home to make Aboriginal films, including Phillip Noyce's `Rabbit Proof Fence' (released 21 February) about the 'Stolen Generation', and `Yolngu Boy' which did well at a film festival in Colorado, I sadly suspect very few of us in the UK are likely to see them. Apparently there has not been a commercial success for a black-themed movie since 1955's `Jedda', the first Australian feature to star Aboriginal actors. If the hope of a '70's New Wave style revival is to be realised for Australian cinema, surely it is time for the industry worldwide to wake up to the fact that a wealth of film exists outside of Hollywood, and that the viewing public may actually welcome some variety. With the release of the director's full cut in 1998 both the DVD and the video are unusually available for the UK as well as the US from Amazon.

A hypnotizing, astoundingly shot story concerning a brother and sister who depend on an aborigine to survive in the outback of Australia after their father commits suicide after dragging them out in the desert in a car running on empty. Roeg's handling of relationships in this movie is a treat to watch, as he effectively convinces his audience that the upper-tier of society can interact and form friendships with the uncivilized. It's a long 100 minutes, and Roeg doesn't necessarily cover all the needed bases (maybe exploring the emotional aftermath of the brother and sister losing their father - they just go on and act like nothing happened really), but his use of music and confidence in his settings are fully displayed. His blatant damning of modern civilization is also impressive, and it makes for one tragic ending. While it's not for everyone and it's a film that definitely takes its time, it still makes for an interesting, offbeat survival tale that definitely deserves a view.