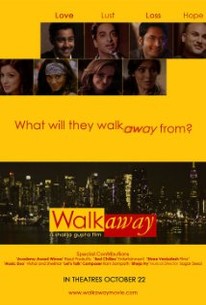 Walkaway, a light-comedy drama, mocks the clutches of social obligations on young Indian professionals settled in New York City. Exploring the subtleties of the Indian mega-institution of marriage, from the now-veiled urban dowry system to the overwhelming compromises demanded of a cross-cultural couple, the film weaves through the lives of four friends who struggle to balance engrained values with modern environs in the fast-paced melting-pot that is New York. In this South-Asian male version of Sex and the City, Darius, Vinay, Shridhar and Soham - single, dating, engaged and married, strive to maintain some semblance of sanity while questioning themselves, their desires and choices, and the importance of unshakeable traditions. Join them and their loved ones on this journey fraught with ethnic and generational differences, and the pressures of modern relationships and careers. What will they choose to walk away from - family, love, or their roots? -- (C) Official Site

Ami Sheth
as Anu
View All

The hedonist possibilities of New York City remain unexplored in Walkaway, whose privileged heterosexual twentysomethings would rather spend their time looking for the perfect partner to take home to Momma.

A pleasant enough time-pass, as they say in India, but stays too near the surface to be memorable.

Only 97 minutes but feels much longer.

Walkaway has an intimate understanding of the push-pull experienced by its gallery of twentysomethings who are comfortable with Western customs, but drawn by an ineluctable bond to a culture they can't shake.

Four first-generation Indian-American New Yorkers look for love, or try to hold onto it, in this Desi-loo production.

There are no featured reviews for Walkaway at this time.