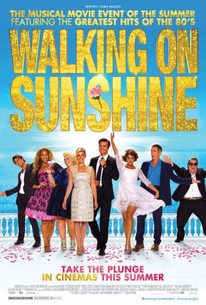 Critics Consensus: It desperately wants to be frothy and fun, but Walking on Sunshine is crass and calculated -- and a poor substitute for the jukebox musicals it attempts to emulate.

Critics Consensus: It desperately wants to be frothy and fun, but Walking on Sunshine is crass and calculated -- and a poor substitute for the jukebox musicals it attempts to emulate.

Critic Consensus: It desperately wants to be frothy and fun, but Walking on Sunshine is crass and calculated -- and a poor substitute for the jukebox musicals it attempts to emulate.

Do you remember your first holiday romance? Taylor does, the only problem is her sister is now marrying him... Set to the greatest hits of 80s, Walking on Sunshine is the feel-good musical of the year and dances into cinemas on June 27, 2014. After a whirlwind romance, Maddie, fresh from a long- term relationship, is preparing to marry gorgeous Raf and has invited her sister Taylor to the wedding in Puglia, Italy. Unbeknownst to Maddie, however, Raf is Taylor's ex-holiday flame, and the love of her life...and that is just one of the set-backs on their road to happy ever after. Introducing rising stars Annabel Scholey, Hannah Arterton, and Giulio Berruti as the tangled threesome Maddie, Taylor and Raf. They are joined by one of the UK's top funnywomen Katy Brand, Greg Wise and multi-award winning and Grammy nominated singer/songwriter, Leona Lewis, makes this musical extravaganza her debut film role. The musical features 80s pop classics such as Human League's 'Don't You Want Me Baby', Madonna's 'Holiday', Cyndi Lauper's 'Girls Just Wanna Have Fun', and Wham's 'Wake Me Up Before You Go Go' to name but a few. The film's music producer and composer, Anne Dudley, comes straight from the Academy Award winning smash Les Misérables. Directed by the StreetDance franchise hit duo, Max & Dania, Walking on Sunshine is produced by Allan Niblo and James Richardson at Vertigo Films and executive produced by Rupert Preston and Nigel Williams from Vertigo Films, Stuart Ford from IM Global and Al Munteanu from Square One Entertainment. (C) eOne

Leona Lewis
as Elena
View All

News & Interviews for Walking on Sunshine

View All Walking on Sunshine News

Critic Reviews for Walking on Sunshine

I am delighted to say that in the cheerily crass Walking on Sunshine we have a strong contender for the worst British movie of 2014.

You may find yourself tickled, providing your toes don't curl up so far that they actually stab you in the heart.

The film-makers (who also directed Streetdance) strike a frantic tempo but Walking on Sunshine is still often like treading through treacle.

Arterton, blonde sister of Gemma, is pallid from every angle, while Scholey feels like a backing singer who, for some reason, has been booted centre stage.

It's as if the screenwriter and the directors looked at Mamma Mia! and thought: "Let's do that again, but make it horrible and bad and ill-considered."

The overkill is almost compelling. Like a storm-follower you want to sit right in its eye. But be warned.

I was really rooting for this to be dope but it just wasn't. It came off as a young woman version of "Mamma Mia" without a lot of the charm.

An idyllic seaside holiday, a bright-eyed ingenue, a cheery retro soundtrack - all incorporated into a big-hearted musical. Sounds familiar?

Frothy musical is a fun watch; some drinking, innuendo.

The film's biggest crime, perhaps, is that it's ineffectual.

Kyle Turner
Under the Radar

A melodramatic love story propelled by a rousing batch of 80s pop hits.

The laziness of the effort is remarkable to watch at times, even when its cast works diligently to put on a big show, making "Walking on Sunshine" amiable but frequently insufferable.

Audience Reviews for Walking on Sunshine

There are no featured audience reviews yet. Click the link below to see what others say about Walking on Sunshine!