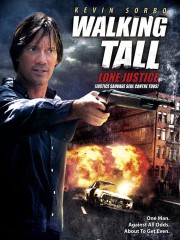 Paul B
October 6, 2008
By the time they get to the third Walking Tall movie in the series they really shouldn't call it that...it is almost completely disassociated from the original and the remakes...Overall it's a pretty good action flick, felt like I was watching CSI at parts due to the texture and style of movie. Typical low budget action and acting.. Overall a pretty good background movie that doesn't require much thought to watch but somewhat enjoyable...

Peter Y
July 26, 2008
A silly action sequel to a sequel. Way too many jump cuts and wanky camera movements distract from the flimsy storyline.

Private U
June 26, 2008
a follow on to the pay back not quite up to scratch of the pay back but still one to see

Jim S
May 26, 2008
I wanted to like this movie so bad because Kevin Sorbo is the man...but I just couldnt. Check out Walking Tall: The Payback if you want to see some quality Sorbo action!

Ron S
½ May 5, 2008
What a shame. The original Walking tall from 1973 was fantastic. This was poorly acted, crappy fight scenes, they kept using a blur effect like you are coced up WAY TOO MANY TIMES, just garbage..

Ascendingxabovexmyxashes w
½ April 20, 2008
Definitely not as good as the first one but it was good.

Erica K
March 27, 2008
i think there were episides of walker texas ranger that were written and acted better...and less painful when wrapped up in an hour.

Picking up where the second movie left off, Kevin Sorbo's character leaves town to go visit his girlfriend in the city Ă?Â˘Ă?Â?Ă?Â? who happens to be the FBI chick he falls for in the previous movie. While he tries to bond with her daughter, she gets caught up in a stressful case, which lands her dead. Taking the law into his own hands once again, Kevin Sorbo heads out to get revenge on her killers.

As much as I enjoyed this movie more then the previous one, I felt Sorbo's performance was far below average, even for him. Also, I felt the overall plot of him seeking revenge wasn't as good as in the previous movie. I mean in that one, I felt for him and understood why he did what he did. But this time, his girlfriend, who is a cop, gets shot and killed while on the job, and instead of letting the other cops handle the case, he takes matters into his own hands. Ok, I'd understand it if there weren't other cops that could do it, or if they were all corrupted like in the previous movie, but they're fully capable of handling the case on their own. I felt that he crossed the line from doing the right thing, such as in the previous movie, to out and out being a vigilante.

However, the movie wasn't all bad. As I said, I liked it more then The Payback. The filming style was very interesting and unique, and there was far more comedy in this then I expected. There were actually times this bordered on sitcom level, but that's not really a bad thing as it helped lighten the mood to an otherwise very dark movie. The second movie was pretty much a rehash of the first, but this one actually came up with its own original plot that expanded upon the characters from the previous movie, feeling like much more of a worthy sequel, although I felt they could have had there be a large number of corrupted cops that helped in the shooting, so it would give him a far better and more understandable reason to take the law into his own hands. The action scenes were very well done, for the most part. There were a couple times it was obvious that they were merely acting, but that only happened a couple times and it never lasted long.

All in all, this is an ok movie and a decent follow-up, although this and Walking Tall 2 should have had their own titles and been their own series as they really have absolutely nothing to do with the first Walking Tall movie, or the original trilogy.

February 25, 2008
There's nothing kevin sorbo does better than protect his own!

Rick M
February 6, 2008
Ex military/cop takes on a drug-lord in order to protect his wife who's a key witness. Too predictible for me.