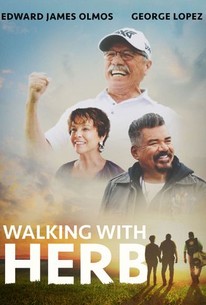 In the wake of personal hardship, the aging Joe Amable-Amo (Edward James Olmos), an ex-amateur golfer, experiences a crisis of faith. An unusual email from an unexpected sender puts Joe back on the path toward his golfing aspirations as he signs up for the World Entire Golf Championship for one last chance at victory. With his unconventional story touching the lives of thousands across the world, Joe's faith in his religion begins to heal, as does his heart. Directed by Ross Kagan Marks. George Lopez and Kathleen Quinlan co-star.

John Quinones
as Self

David Feherty
as Self

Critic Reviews for Walking with Herb

A genially pleasant comedy-drama that is elevated by the sincerity and conviction of actors (especially Olmos) fully invested in their roles.

This head-scratcher of a faith-based dramedy is filled with kind, appealing characters; it's hard not to love them, but the movie is also extremely odd, with awkward rhythms and puzzling choices.

As Herb, George Lopez has one of his best roles in quite some time.

There are no featured reviews for Walking with Herb at this time.