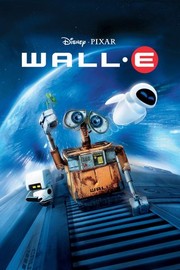 May 17, 2019
A great cartoon with deep revelation about the effect of how bad we treat the earth

Rocket B
May 11, 2019
pure heartwarming film! leaving with nostalgic memories about the film

Tyler S
April 28, 2019
As what we should expect from Pixar at this point, they have made yet another outstanding piece of work. Giving us a familiar 'save the environment' message and executing it to perfection while addressing it in the right way. We also have animation that was gorgeous, like usual. The characters were terrific and easy to connect with. On top of beautiful visuals, a great setting, and a lot of emotional depth. Its another great classic.

April 2, 2019
What a masterpiece. A robot can, without speaking, be so expressive, emotional and human. A love story that makes us feel passionate and moved.

March 22, 2019
Best film off all time. Brings back some good memories and crippling dread for the future every time.

Piper K
March 11, 2019
There are only 5 words for this: "Best Animated Film of 2008". Man, a movie that combines Environmentalism & a love story has never been done until 'Wall-E' came out. I mean, movies about this kind of thing had never ever been good, but this one, went to the infinite eternity of space when it took off. The reason I say this is because, most people won't even flinch when watching this, but they won't think kids will even Watch the movie because of the storyline, which is just amazing! There's no words for it. But, some parents would actually question the story for it's commercialism, environmentalism, etc. But, I am only 10 3/4, and I've loved this movie ever since I was only 5! And, I understood it very well, and I actually turned to enjoy it from then on. So, I think it's safe to say that, you shouldn't hold back on seeing new movies, even if the storyline doesn't interest you, you might still turn out to love it. Even though the first half hour barely has any dialogue, and we only rely on facial expressions, it actually feels like Eve and Wall-E have a connection with each other through out the movie, and the ending is one of the best I have ever seen, when the Axiom finally after 700 years returns to earth, and Eve and Wall-E finally found what they were looking for, along with the funny animations during the end credits, you've got yourself one heck of a heartfelt movie and ending.

Justin C
March 8, 2019
The movie was slow and the environmental agenda wasn't welcome theme of the movie.

J C
½ February 25, 2019
Again not Pixar's best work. The there was also a subtle agenda that shouldn't have been in the movie.

February 23, 2019
Superb Movie for so little dialogue (It doesn't need it) Why is there no 2nd movie?

Anonymous User
February 15, 2019
My all time favourite animation. My favourite movie, alongside The Dark Knight

Caleb L
January 19, 2019
With beautiful animation, an endearing story, and very charming characters, Wall-E is easily one of Pixar's best.

January 16, 2019
I personally really like the movie WALL-E. The camerawork is really well done and the visuals are amazing. I also really liked the plot and how it perfectly lines up with the standard 3 act structure. I would recommend this movie to all ages.
Page 1 of 2652